Yesterday, Charlotte was sick. A co-op classmate had the exact same symptoms the same six hours after co-op so we decided it was food poisoning.  None of the other kids were sick.

It had been a full 24+ hours of Charlotte being well. The two big girls had plans to go shopping with friends. I dropped them off in the mall and we were walking back toward the food court to exit when Ruby looked at me with that look on her face. As a chronic puker, Ruby gets carsick on an at least weekly basis. I know that look.

I shoved her toward the decorative giant black vase-shaped garbage can in the mall court. There I stood, with five littles, watching her vomit all over the garbage can and it’s contents.

That might be a new low in motherhood for me. I pulled baby wipes out of my purse and that garbage can is now cleaner than it was before she violated it so dreadfully. A nearby kiosk lady asked if I needed anything. I advised her to call someone to change that trash bag. It was not going to be anything she wanted to smell in her workspace.

We hightailed it to the van. Ruby assured me she just got carsick. She does this all the time. So I took her word for it, got groceries, and went home. She threw up again on the way home. I’m a skeptic at this point that she is truly carsick. Twice in one day is a bit much, even for Ruby.

Then Stellan got sick. Then Elliot. At one point Ruby was vomiting in the sink, Stellan vomited on the floor, and Ruby moved out of the way for Stellan to be washed up. Then Stellan got thrown at someone so I could help Elliot be sick.

These are not the things you read about in mothering books. There’s no soothing their brows with warm compresses. There’s no offering a sip of warm tea. Oh no. It’s trenches, messes, and stench.

It’s watching the dog head for the pile of vomit and deciding that’s a good option. She apparently didn’t, though. Sadly enough. Yes, I know that’s disgusting. No, I didn’t care. She eats far worse things in the barnyard.

Then Liberty texts that she’s not so sure she’s 100%. Sterling babysat the littles for the first time while I ran back to town for the girls because, of course, this is the night that Blaine has to work late and there is no way I am hosting a pukefest in my van.

By the time I got home, Stellan had thrown up twice more. Shortly after, Sterling, Liberty, and Pierce succumbed. So far Eden is the holdout, but she’s unsure of her intestinal fortitude at this point.

My living room looks like a slumber party but all the snack bowls are empty. 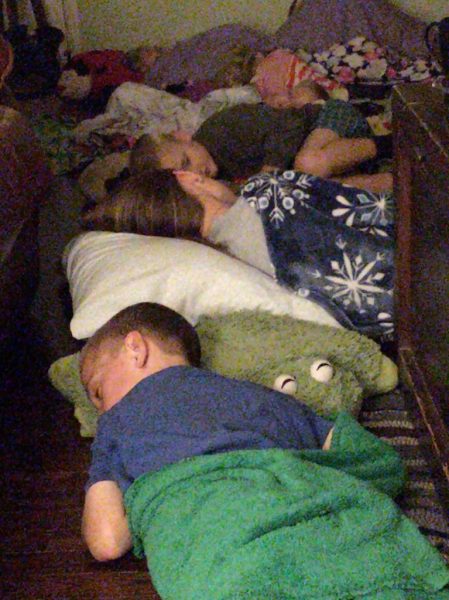