About a year and a half ago, we added texting to our cell phone plan. Up to that point I had been using a simple little flip phone that was strictly for calling, but Blaine had been assigned an iPhone phone for his work and we ended up switching my phone to an Android smart phone as well. Because, well… his was cool.

About two minutes into new phone ownership, I found out something that’s pretty important to remember.

You can’t tell tone in a text.”

The first time I received a text from my dear husband that had my scratching my head on why he was being so short with me, I was left wondering what on earth I had done to offend him. Turns out, nothing. He was in a meeting. Or deep in conversation with someone at work and didn’t want to leave me hanging. Or a million other scenarios that don’t involve eight children, 1200 square feet, breast milk, or dirty diapers.

And so began this new way of communicating. I do love it – no matter how loud my house is, you can’t hear it in a text. If my cell has horrible reception, as it’s prone to have, a text will still go through. But it’s been a new way to learn that seeing life from another’s perspective is pretty stinking important.

Sometimes I text my husband and get no reply for hours. He’s not avoiding me. Just busy. I must remind myself of this. Once I sent a photo of the requested item he’d sent me to the store for, to be certain it was what he wanted. I wandered said store for the better part of an hour, waiting for confirmation. It cost him more than the purchase price of the requested item… because said store was Hobby Lobby. Mmm hmm, killing time in a craft store. He never did answer me – but I do have a cute little white wooden bird to show for my time spent wandering. It was $1.38. I’m not certain I fully took advantage of the situation. 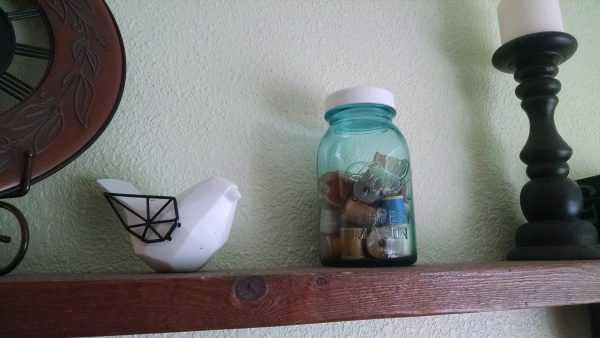 Sometimes I get: OK

No ‘ay’. No punctuation. Just a mere nod of the head to acknowledge that he received my text. Now, when my text is, “Hey, can you pick up hamburger buns on your way home from work?”, OK is, well, okay. Coming from a lover of the written word, punctuation would be lovely, but it’ll do. I haven’t decided if it’s a step up or a step down from sending one of the three hundred possible emoticons.

But when the text is something like, “My day is going horribly. Pierce colored on the couch with a Sharpie. Ruby cut her head open on the bedframe. Sterling shot the dog. Elliot pooped on the patio. And Stellan pooped on me!” the “OK” is less than I’m looking to receive back.

And there lies the difference between men and women. Blaine’s taking that text as a warning to watch where he steps on the patio and to be sure he throws his hat in the door to test the waters before entering, and I’m looking for empathy. I’m not looking for a solution; don’t get me wrong. Because we have that one going on too. No, don’t try to fix it! Just bring chocolate.

(For the record, Pierce hasn’t approached the couch with a Sharpie and Sterling hasn’t shot the dog. The poop occurrences aren’t a stretch, however. Neither was Ruby’s injury. Just none on the same day. Thankfully.)

My favorite is the thumbs up sign on Facebook messaging. I’ll pour out twelve sentences of requested info, have involved a Google search or three to check my information, typing two thumbs at a time on my phone, and the response is a thumbs up. For the love of all things proper, don’t do it! The good news: my dear husband has yet to thumbs up me. It’s the little things.

Communication has changed over the years. All I can think is how thankful I am that I was married with children before texting and Facebook became a thing – before context and tone became a guessing game and a practice in grace and understanding. Before changing his Facebook attached status is the first clue your boyfriend decided to move on.

Before OK is all you hear when you pour out that you’re having a bad day.

Turns out, Android and iPhone communicate about as well as men and women. My Android sends texts in chunks to his iPhone. Not necessarily in the right order, just broken up randomly. It’s like a super fun puzzle where you have to fill in the blanks until all the components arrive. Except for the super fun part. I’ve been told it’s not that fun. Also, his phone apparently has more emotions than mine – because there’s a good number of emoticons that he sends that fail to transfer across the waves and I get a blank text. That doesn’t transfer very well into my analogy about men and women though, because I am nearly positive that no man experiences the range of emotions that women do so… do with that what you will.

I’m learning to text a girlfriend if I want empathy. To text my husband when I need groceries picked up, or if there’s an appointment that he might forget. Basically, all the things that OK is a proper response to.

Or if I merely want him to watch his step on the patio – he’ll appreciate that info.