I took the kids to the pediatrician today. It’s one of my favorite things to do with eight children. Squeezing nine of us, plus the nurse or doctor, into a room not much larger than my bathroom is pretty spectacular.

The best part was when they called us back and I was herding  children toward the door the nurse was holding for us. I counted kids – as I do no less than 20 times an hour, all day, every day – and we headed back. We got halfway to the exam room when we realized we were missing Elliot.

Proud momma moment. It got even better when the pediatrician rounded the corner as we were realizing she was missing and he had to be the one to go get her. Hello, I’m the mother of eight children, and I can’t keep track of them all. Aren’t you impressed? Elliot was standing in the exam room staring at the door we’d just disappeared behind, clearly surveying her options. Miraculously, she wasn’t upset. She just hadn’t walked fast enough to keep up. I’d make a comment here regarding her response and her ability to adapt to being left, since it happens so often, except it doesn’t. Promise. Thus, the counting. All. Day. Long.

If I didn’t appreciate the pediatrician we have so much, I’d look for a new one. “Do you want to interview the potential doc?” “No, I want to see the exam room. I’m looking for one that possesses exam rooms that are at least 10′ x 10′. That gives us each ten square feet to inhabit for the fifteen blessed minutes that you diagnose and treat whatever malady we happen to be visiting for.”

Except I found a pediatrician I like. Four kids ago. When closet sized rooms were doable. So now we’re stuck. Two chairs, nine people kind of stuck. Elliot always sits on the step stool kind of stuck. Hold on, don’t open the door; four kids are blocking it kind of stuck. It’s enough to make me wish I could email a photo of whatever is bothering us and a payment to the doc and he just diagnoses and calls in meds or gives advice. Can healthcare go there?

After our lovely game of sardines at the doctor’s office, we went to the library. We checked out eighty books. No lie, 80. The librarian looked at the four large baskets of books containing twenty books each that she was checking out for us and asked how on earth we would be getting them all home. Their baskets were clearly not an option, since we can’t keep them. Darn. Umm… children. Because I didn’t bring bags. Or a stroller. Seven of them are capable of carrying books, plus me. Doable. The walk of shame down the library corridor with eight children and eighty books was particularly enjoyable. Not only did the comments come about my children, but they also commented on our love of reading. We even ran into an acquaintance in the parking lot. One with one child. It sealed the fate on exactly how insane all of this is. But. They… the librarian, the passersby, the acquaintance… they do not realize that those eighty books are an insurance policy against “It’s so hot that I don’t want to go outside so I’m going to lay here and be bored and drive you crazy, Momma.” Time well spent.

We got groceries Monday. Tuesday, we were out when a most horrid smell permeated the van. I asked who took their shoes off… Ruby had. Oof da. Gag, breathe only when absolutely necessary, and pray we didn’t get stopped in traffic. Stop after stop, I’d ask who took shoes off of hot sweaty feet. I’d beg them to stop. It was Sterling. It was Ruby. It was bad. Very, very bad.

Finally, last stop of the day, it was discovered that the milk we’d bought the day before had leaked in the cooler in the van. After a day of 95+ degrees, it was a lovely shade of stench. Ruby apparently opted for payback for having been blamed and opened the wretched cooler once more for good measure. She wins. 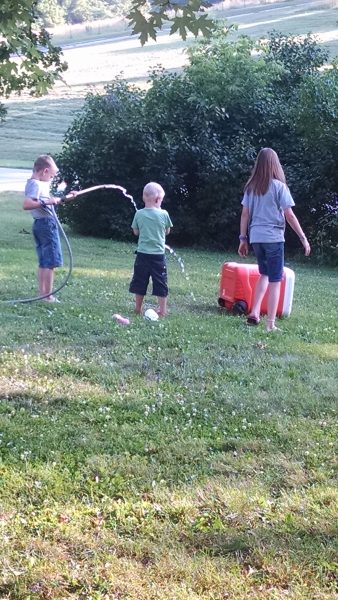 So bad… Sterling gagged even during the hose down process.

In other news, Stellan has a tooth, and he’s not afraid to use it. Nursing is going swimmingly, thanks. 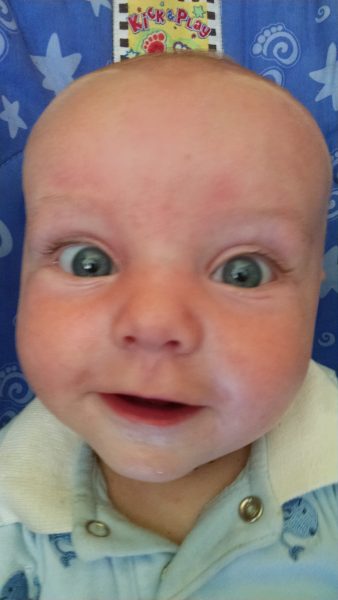 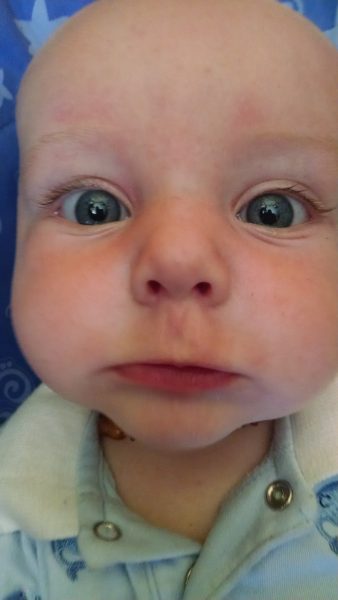 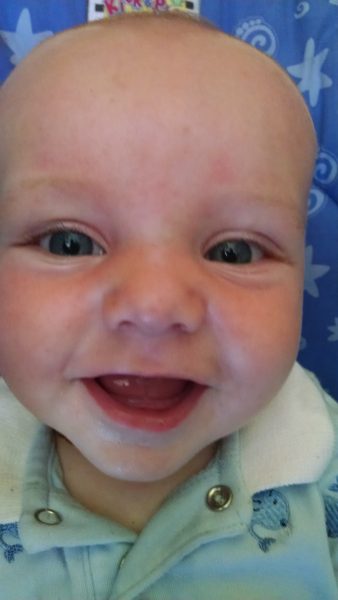