Ellie has learned to say no… Effectively. When necessary, it’s “Noooooooooo!” She’s quite determined, and she’s giving me a run for my money. That child in the grocery store that you shake your head and wonder what on earth the parents are thinking letting her act like that? Yeah. Me. Except I don’t let her act like that. I correct it. It’s starting to only take a look to get her to see her ridiculousness and hush her. But. It’s every. Five. Minutes. It’s exhausting. I’m not sure I’m winning.

Blaine’s been in Florida. I’ve been in Missouri. I ran the heat. He sweated in the shade. I laughed when he left the airport and shivered. Welcome home, my dear. Blaine brought me a bag of Florida sand. (He tried to bring more. Turns out, 2 quarts of sand weigh ten pounds. Exactly what his luggage was over at the airport…) The sand is so soft, it’s incredible. I miss the beach. I’ve never been to Florida, but New Jersey and New York were pretty special too. Someday. 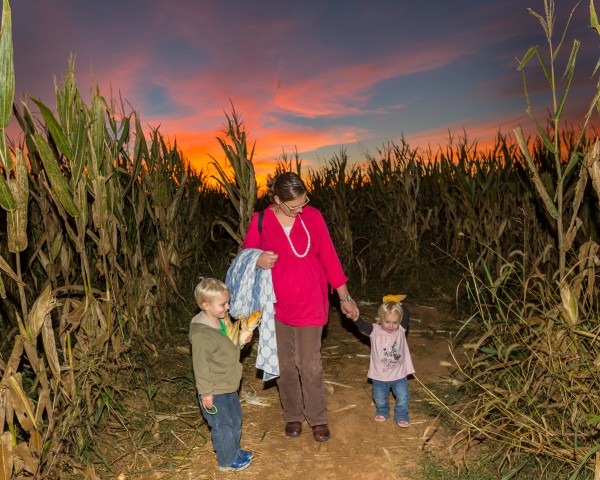 I started my third trimester. I dread and look forward to it with every pregnancy. It’s miserable, but there’s an end in sight. Things are hurting more and more. Baby makes my whole belly shake with his jumping. We still haven’t really discussed names. I bought boot cut yoga pants today. Trying to decide if I dare be seen in public in them. Leggings are not pants… But these are different, right?! They seem far preferable above maternity pants. I still haven’t given in to maternity pants. Still wearing my jeans, and they still fit, but I get horrible stretching ligament pain and I think the jeans might be compounding the problem.

We’re planning a quick trip to my parents in South Dakota this week. 9 ⅔ people, 20 hours of travel, two dogs, three on the way home (picking one up there for a friend) sound like a fabulous time. Or something. Maisie hasn’t done anything to endear herself around here lately.

I’ve been working with Ellie on potty training. So far, she’s learned to hold it for hours and hours, them find the most inconvenient place to let loose. Rugs are prime targets. So are beds. Come to think of it, she might have learned the “Noooooooooo…” from me. 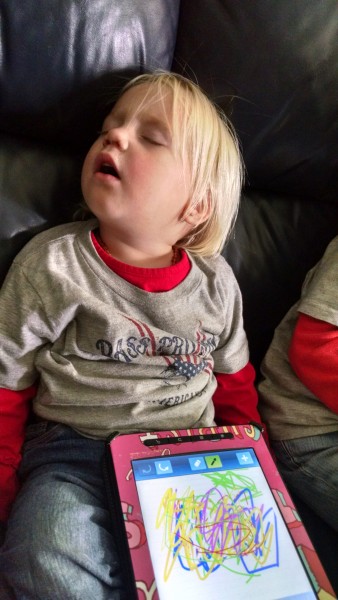 Ruby set Ellie to coloring on her tablet today while we were doing school. That quickly turned into a two hour nap. (From the girl who typically naps 30 minutes, tops, I’ll take it!) Funny, Ellie loses her cute when she falls asleep randomly. She rather looks like she’s passed out drunk. There’s nothing peaceful about it. Crazy girl.

A guy walked into a pole today at the grocery store because he was so busy watching me and my children walk down the store aisle he failed to see the 2′ square metal pole in front of him. It dinged and everything. I didn’t laugh. It took every bit of self control not to, but I didn’t. That was moments after a little girl commented to her parents “That family has a ton of children!” She got shushed and told to pay attention to what she needed to do. Funny, I’ve said that hundreds of times, but it was always when I didn’t want them to be rude to someone different than themselves. Strange realization to see I was the weird one… Weird enough to walk into a pole over. Okay, now I can laugh.

Good thing Ellie wasn’t in a “Noooooooooo!” protest just then, while I gave her the “Really? Again?!” face. I didn’t have my new yoga pants on. Who knows what they might have been thinking was more obscene?!