We’re officially two weeks in, and moved into our second state park. Missouri state parks allow you to camp for two weeks over every four in any given state park, so we have to switch at least every two weeks. This one is closer to the church we like and areas we’ve been looking at. It has many bike paths and the kids are having fun with that.

Eden’s engine block cracked and started spewing coolant. Research says Honda knew of the issue and offered a ten year engine replacement when it happens. That expired five years ago… of course. Blaine and Eden worked on it a bit and put fluid in it that is supposed to slow/stop the leak, albeit temporarily. Poor kid is not working, taking 24 college credits this semester, and possibly buying herself a new car. She’ll try to limp it along for awhile. Liberty has the same car in the same year… hopefully it doesn’t decide to give up too.

Lachlan is getting pretty good at moving around. He doesn’t crawl on hands and knees usually – he does the worm on his belly much more, but he’s getting back into sitting and up onto his feet really well. He’ll be a year old in a week and a half. 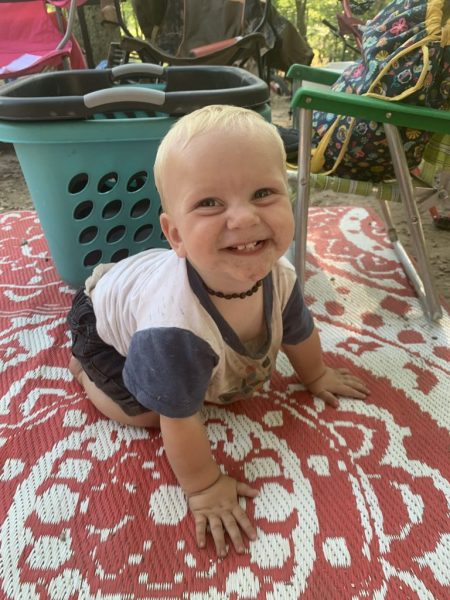 Pierce has remained seizure free for two weeks now. He’s done a good bit of sleep walking, which is normal for him, but I can’t help but wonder if it’s all related. His meds have some frustrating side effects that have seemed to affect his personality and energy level, but no seizures is good. Those have been hard trades to make though.

We’ve driven a lot of miles, looked at a few properties, and looked at a lot of areas. No definite answers yet, but we have places we like.

We went down to Springfield one day and got the school year rounded out with a trip to the curriculum consignment store there. We’re ready to start. I think it’ll be a bit before we go back full force, as we look forward to a visit from Liberty over Labor Day and for Ruby and Lach’s birthdays, but I think we’ll start a few things next week. I’m looking forward to the literature curriculum that I bought and want to start that! I have fun plans for our school year. After being in co-op for so many years, I’m starting to find my groove on doing this alone. It’s kind of exciting. 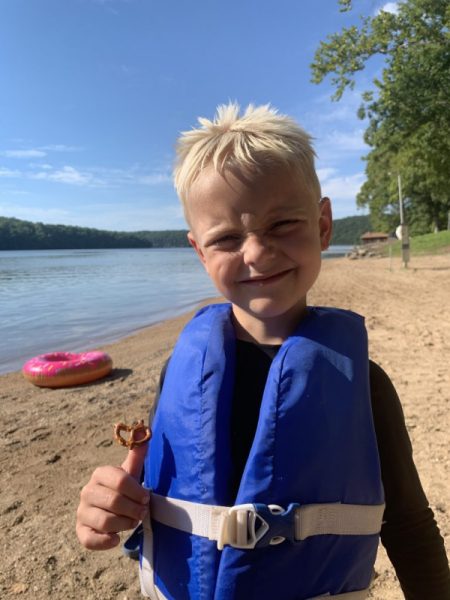 We’ve had no more raccoons save the ones that try to raid the campsite each night. We’ve gotten pretty good and getting things put up so they fail in their raid. Blaine fixed the screen the next morning after the coon came into the camper and we’ve had no more excitement with them inside the camper.

The boys are perfecting their fire building techniques and come traipsing back to the campsite with a log or branch they’ve found on a regular basis. Marshmallows and s’mores have become a routine treat. The campground host laughed at my laundry loads I hauled up the hill to the laundromat and said I do a lot of laundry. I’d thought we were doing pretty good with two loads every three days! I haven’t seen a laundromat at this new campground. I’m hoping it has one. Sure makes life easier. 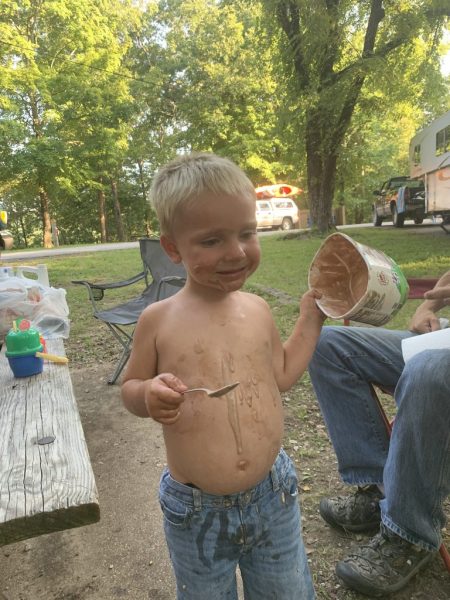 And then there’s Creed. This ice cream escapade ended with him scraping it off his belly with his spoon. And then he had a bath!