Several years ago, Stellan was in a class at co-op that used a stuffed tiger during classroom teaching. Stellan got to take a turn bringing the tiger home, and he talked about it for weeks. He desperately wanted a tiger of his own. I looked and looked for one for him for Christmas. Turns out, stuffed tigers are hard to find. I finally found one that looked nothing like the classroom tiger, but he was old enough to appreciate the effort anyway. It was $2 from Menards, the hardware store. It was entirely ugly, but desperate times.

A few weeks later, I found a different tiger. He was cute and looked very much like the classroom tiger. I got that one for Stellan, and the Menards tiger sat forgotten until far too long past to return. Creed briefly claimed him, then Lachlan decided it was his own. Now, he’s definitely Lach’s. He always holds him by the tail, cries if you take him away, and sleeps with him like a security blanket. I turned the tiger over briefly to show you all how ugly it is. This is the photo I got. Lach is throwing a full on tantrum because I took the tail away.

I’ve never had a baby so attached to anything. This ugly little tiger sees way more love than the tiger that Stellan got that Christmas. He took a trip through the washing machine last week and he didn’t come back much cleaner. I’m super tempted to see if Menards has another, to give me a backup if this drags on like it seems that it might. 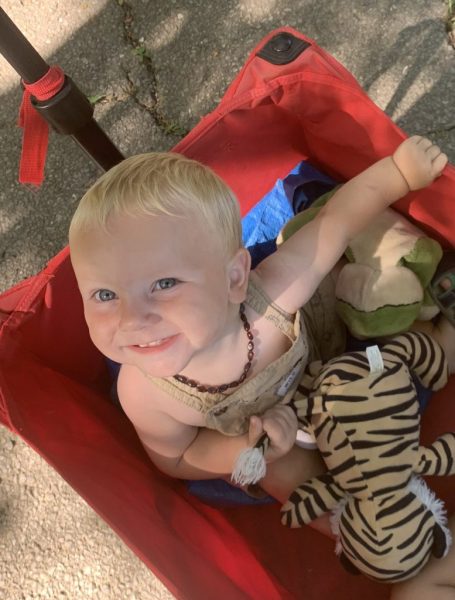 In the meantime, it’s stinking cute.