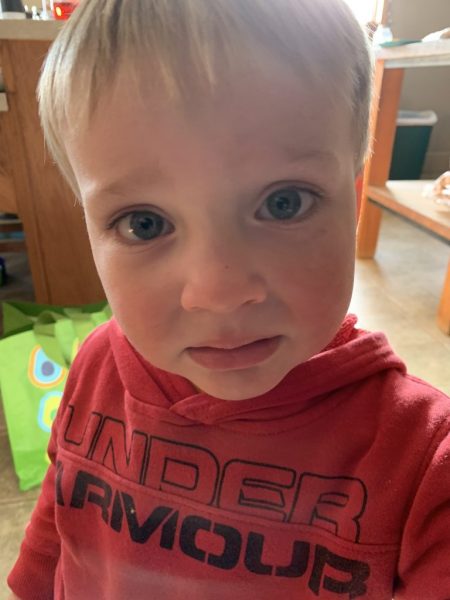 Creed has a serious attachment to his pacifiers. He wants them 24/7, but handles life without them when he’s up and about. Nap time and bedtime though – he did not want to give them up. He’s the oldest I’ve had still using one, but I’ve been dragging my feet on taking it away because of everything else being so crazy right now.

Sterling was my only other one that was desperately attached to the pacifier. Most of the others took one, but giving it up was only mildly upsetting. Rookie mom that I was with Sterling, I blew it big time. I’d heard cutting the end of the pacifier off would take all enjoyment out of it and break them quickly and easily. He saw me do it. He cried about Momma breaking it for weeks. It was neither quick nor easy.

This time around, I gathered all of Creed’s up and hid them. I’d considered throwing them all away but I chickened out and kept them just in case my sanity couldn’t handle this. Lachlan refuses to take a pacifier at all, so I gathered up the random ones we bought and tried with him too, just in case Creed decided a tiny binky would do instead.

First night: he fell asleep snuggling with Blaine. Painless. This is clearly going to be so much easier than I thought.

First nap: he cried like he was dying for four and a half minutes and passed out. Wow. I overestimated the drama by a long shot. He’s totally ok with this.

Second nap: he cried and thrashed about for forty five minutes. No consoling helped. It. Was. Awful. I doubted my decision to do this.

Third night: he cried and cried and ended back snuggling with his daddy. He fell asleep and was moved into his bed. Two hours later, he was crying and it took several minutes to calm him down. Repeat that every couple hours, all night long. I stared at the drawer that contains the pacifiers with longing. It would be so easy to give in. We’d both get sleep. But no. Persevere. Over. And over. And over.

I found out the next morning, he’d pooped in the night. He never does that. But his bottom is now a rashy, angry mess and I had no idea. I don’t know if that’s what sparked the problem at midnight, or if that was all about the pacifier. I’d just assumed and hadn’t investigated very far. He hadn’t stunk, so that has me wondering. Regardless, I’m feeling like a major failure at this right now.

Third nap: Ruby held him the whole time. He was having none of it until she went to him. Bless the older child.

That was today. I’m running low on sleep, low on patience, and hoping we find a new normal any minute now. I’m tired and really wondering why I decided to do this. Surely he’d give it up on his own sometime before college.