Monday, I had foot surgery. And now I’m bored. I had a bunionectomy and first toe straightened. I’ve been laying with my foot elevated above my heart for three days now. I took prescription pain meds for a day, ibuprofen for one and a half more, and I’ve done fine without anything for much of today. I’m thankful. Nursing Creed and painkillers and side effects I’d rather avoid was making that a hard call. That first night death seemed imminent based on level of pain, but it diminished quickly. But now I lay here. I can’t walk on my foot. Crutches are awkward and I’m horrible with them. I imagine I’ll get better before this is over. I’m looking at two weeks of crutches, then a walking boot for a month or two. Today I worked in my laptop, scrolled Facebook to sheer boredom levels, drew a picture on my thigh with a pen, and re-pierced my nose after having let it close last November. I figured if I was going to do it, doing it while I was on ibuprofen was a good idea. But then I quit taking ibuprofen and now my nose just hurts. Fail. 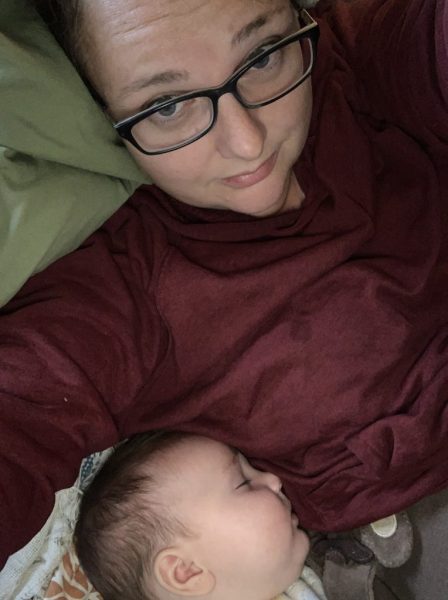 A friend says I need a hobby before I resort to tattoos, prison tat style. She suggested macrame. I might have to look into that if the doc doesn’t clear me for some activity at my appointment tomorrow.

Creed has rather enjoyed our time on the hide a bed. We hang out in the living room 24/7, and he gets as much of momma as he can possibly stand, because I’m bored and baby giggles are totally the best sound in the world. He’s taken to sleeping by my side like he was waiting all his life for this.

I rather thought this little break might be enjoyable, save for the pain. I’m over it now though. I’m caught up on checking math, I’ve seen enough Facebook to last me months, and that bath I took this morning felt like a little getaway. I haven’t set foot in the kitchen all week, and while the kids say it’s clean, we all know that’s a questionable statement. I’ve folded all the laundry. I can tell you where every ceiling crack is, I’m thankful the ceiling fans recently were scrubbed, and I’m thankful for our co-op that is bringing meals.