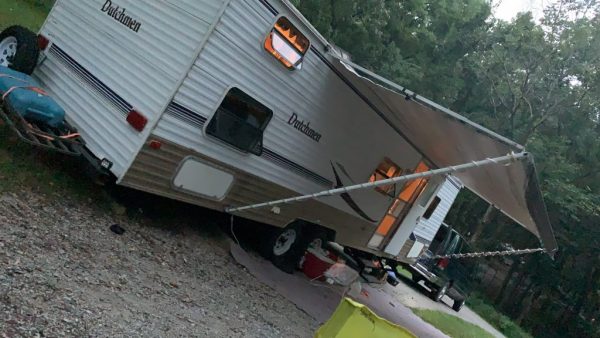 About 1500 miles, two trips to the ER, a lot of marshmallows, and eleven days later, we are home. It was a lot of driving, a lot of family, and a few moments I could have done without. Overall it was a great trip though. 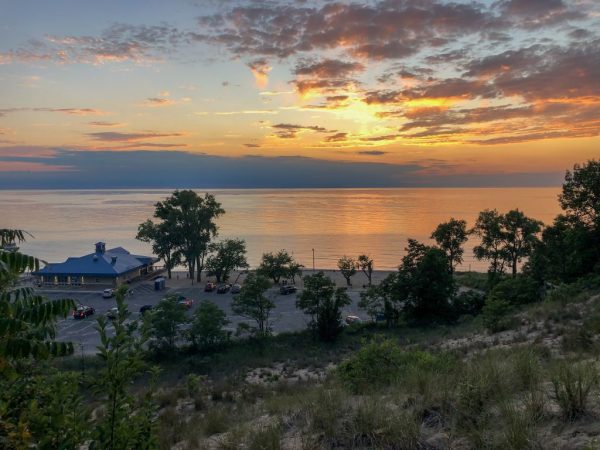 We spent seven days with Blaine’s family in Michigan, a day camping at Lake Michigan, then headed south into Illinois (to the only campground between Michigan and Missouri that had openings and didn’t balk at a family of eleven… because we didn’t plan ahead). We spent three nights there with just our family, hanging out at the lake, fishing, swimming, and the kids rode their bikes around our campground loop dozens and dozens of times. They gathered firewood from wherever they could. One kind soul directed them to the spot behind his site for a bunch of wood, and the last morning the man drove past and told me he’d woke up and looked out because he’d heard a noise. Charlotte was building a fire sans flames for him. “She built a teepee and everything! We cooked our breakfast on it!” So fun to see her be her Charlie self. She loves to serve. 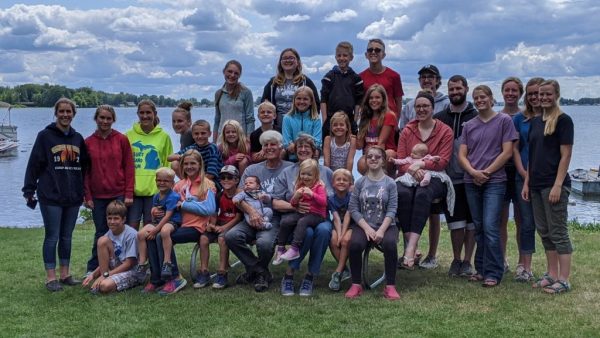 Most – missing five – of the cousins on Blaine’s side, plus Blaine’s parents.

One day in Michigan we had a party in a park for relatives that live nearby to see everyone. The kids were playing on the tennis court and jumping nets I’m told. I wasn’t looking. Ruby jumped the net, caught her foot on the net, and fell. We ended up in the emergency room in Grand Rapids, and many x-rays later, we were told her arm, despite major pain even with painkillers, wasn’t broken. She was sent home with a splint and a sling to let her arm rest and told to take the splint off before 48 hours. We took it off at the 42 hour mark, and she was in excruciating pain – more than she’d been in even when it happened. We headed back to the ER, but stopped for supper on the way. A lot of ibuprofen had her tolerating life and ice cream was in order. She decided her arm felt normal. I had her reach for the ceiling to prove it, and just like that, much, much more pain… and then oddly less. 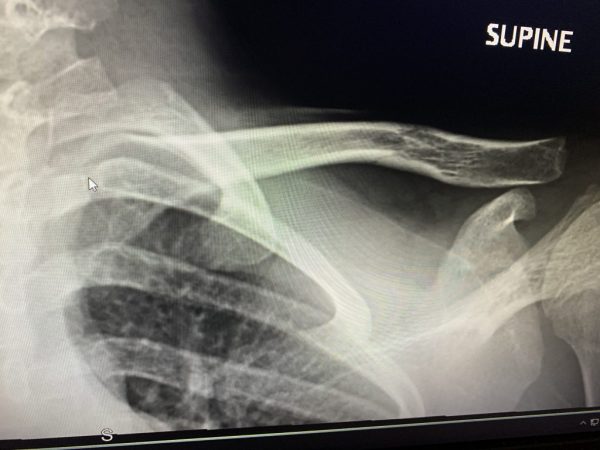 Excuse the x-ray. But since this is the only way I get things written down… documentation of poor Ruby’s injury.

We went anyway, and they said it was fine. That taking the splint off must have made the nerves go ballistic. The student docs – two of them – both told us she was fine and we were about to leave when the overseeing doc came in and said he was suspicious. He x-rayed her collarbone, and it was broken. Good. Grief. We’re pretty sure reaching up lined up the bone better, because her pain was so much less after. She spent the rest of the trip in a sling and a wrist brace for a sprain. By the end she was riding her bike with one hand and we could barely keep her down. Today she took the sling off and is in little to no pain.

That was my first trip to the ER for an injury. One other time we went for illness. I’m good now. Enough of that. 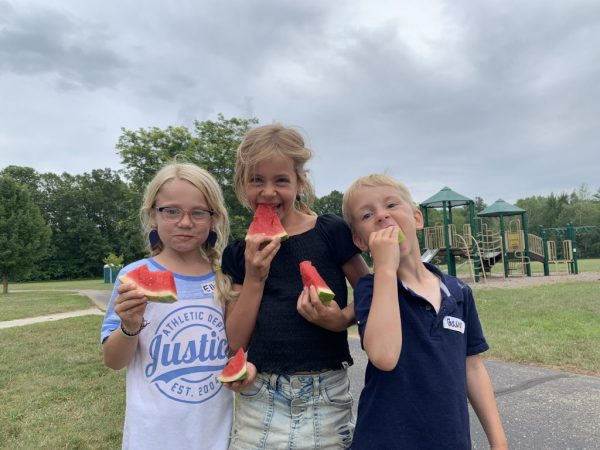 Cousins are the best. We met these for the first time this trip. They were fast friends.

Stellan loves to fish. He figured out the open reel this trip and had a blast with it. I sat watching when I realized the Blaine and his mini were dressed to match and everything. 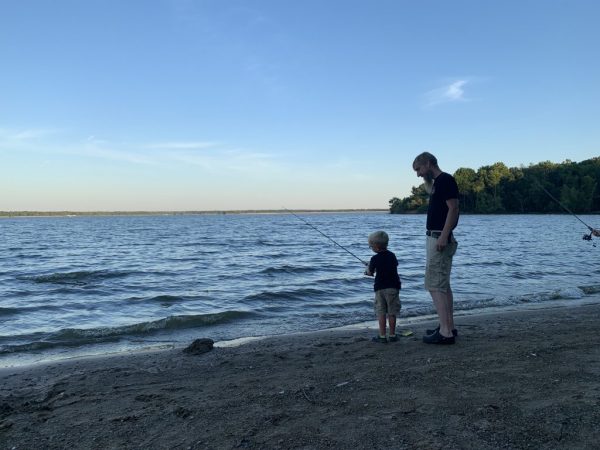 Sterling got all the cool points when he caught a fish, was given another, and chose to clean them and share the bounty with his cousins. I’m not sure if they were impressed or grossed out, but the crowd while he cleaned the fish kept growing. 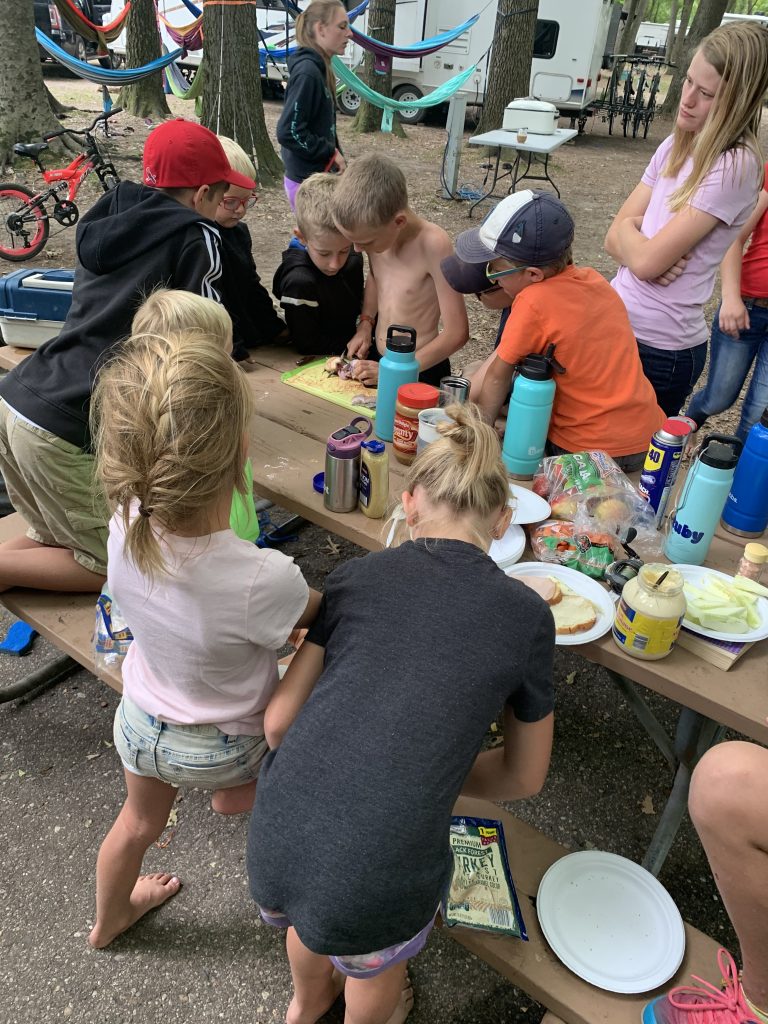 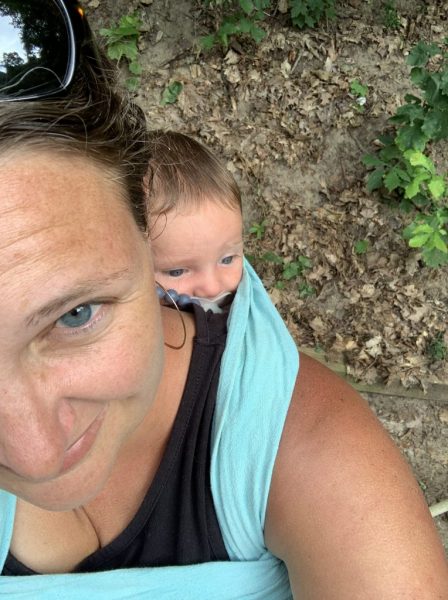 Creed got peopled out. He loves the slings.

Great Lakes was the kids’ one request. We could only find one campground that wanted us (again, eleven people – some places freak out or want $5-$10 each for over a certain number) with one night open… but we made the most of it. It was fun. So much sand, water as far as you can see, and dunes to climb. It’s so different from our world. Blaine shot this after I went back to the camper with a cranky baby and a couple kids who found the dunes near the camper to be the best part. 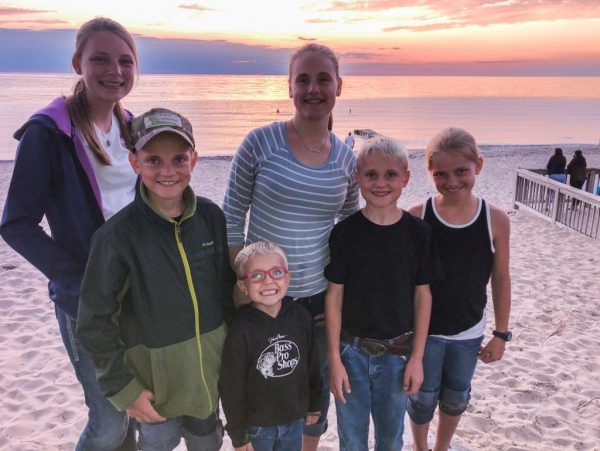 And just because, baby smiles. Because Creed finally got really good at grinning. He’ll be three months old tomorrow. He was a champion traveller. 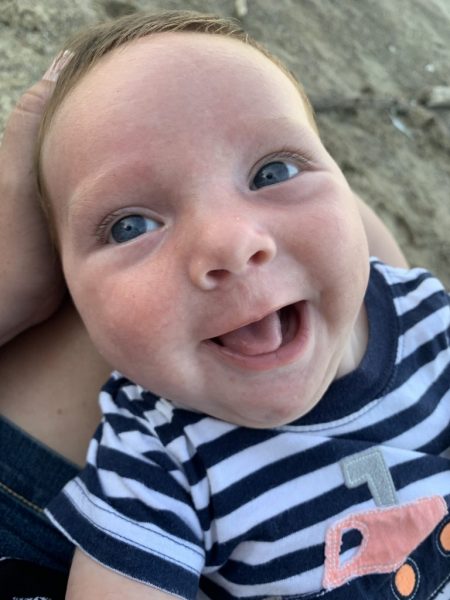