Lucy the calico cat has been getting rounder and rounder. At one point in recent days my children were discussing who was rounder, Lucy or me. They decided Lucy was rounder. Since her gestation is mere weeks and I have two months left… I’d agree. They made a wise decision.

Wednesday night we had worked outside much of the day, and we made a fire in the pit to cook supper over. Packages of hotdogs joined the pork chops and kids were having a great time cooking things on sticks. Lucy was prowling around in typical cat fashion that makes me think how closely related to lions they are, and then she pounced, stole a package of hotdogs and took off.

So there was my round self chasing her round self. The package of hotdogs in her mouth was a decided disadvantage for her, but she was not giving them up without killing the person who tried. We zig zagged through the yard before she made a swift run for the camper and hid underneath. And just like that, I was the rounder, because no way was I going to fit under there. Eden to the rescue, she came out with cat and hotdogs and I stood there heaving and angry. I despise animals that do not know their place. Animals that steal food are at the top of my list of Animals That Must Go. The kids begged me not to kick the cat for fear that I hurt the kittens. She got away scot free. Dumb cat.

The saga continues. She prowled unsuccessfully all night, trying to get our food. Fast forward to the middle of the night, I heard her screaming and figured kittens were about to make their appearance. I rolled my wide girth over and sighed. I’ve got ten weeks left.

This morning, giddy with excitement, the kids came to tell me of Lucy and her kittens. Four kittens made their way into the world this morning an inch from Sterling’s head onto his sleeping bag while he slept. He’d made a fort in the pasture and was sleeping up there and missed the whole thing. Charlotte found him still asleep, blood and cats next to his head.

Now we wash sleeping bags, having convinced Lucy to move the kittens to the patio. Stellan is quite pleased with it all, and proudly told our tom cat Leo to “Look at those babies you made! Good job Leo!” While I’m quite certain he has no clue of the details of how that happened, it made me laugh. These four kittens raise our (barn) cat population to nine. Already Elliot is worried I’ll give some away, because even this place doesn’t have enough mice to employ nine cats. Meanwhile, Leo sleeps, Mizzle the goat snuggled up with him. 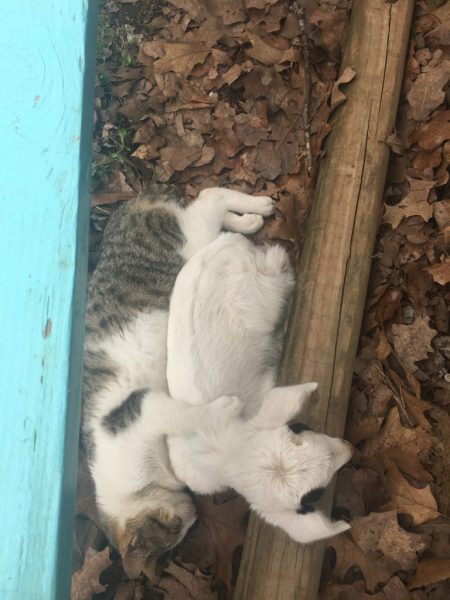 We live in a zoo. The goat tries to get into the house every time the door opens. We caught her peeing on the rug in front of the door. The cat steals food. The horse lays down and gets stuck. The cat has babies next to my sleeping son in the woods. The billy goat is tied up by his horns, because he pulls his tire tie-down to the girl’s goat fence and jumps the six foot fence every time he wears a collar. Apparently horns are more sensitive, because he’s finally staying put and not pulling on his rope. We number nine cats, nine goats, one horse, and one dog.

And soon, eleven people. It’s a party around here. No boredom to be found. Just a lot of work. And cleaning. And hosing down rugs and washing sleeping bags. Good grief.