My day started out about like a normal Saturday. Sit around, drink a cup of tea, with plans for a shower momentarily. I had a friend’s baby shower to attend in the afternoon, plans to clean the house a bit before then.

Yesterday, we had triplet baby goats born. I sent Ruby up to check on the new babies. She came back with the report that the mama was not letting one of the little doelings nurse. Ugh. Sent Eden up to investigate and possibly force the issue or milk the doe to bottle feed the doeling colostrum. Eden sent Ruby down in moments with the report that Aggie the horse was lying down, belly swollen, and clearly sick.

My brain starts scrambling for which vet to call and what on earth might be wrong. She’d seemed fine when we’d been up witnessing the birth of the goat kids the evening before. I cringed at the thought of the bill I’d get from a weekend emergency call to the vet. Wished the horse trailer was here and not left at a friend’s an hour way, thinking if we could get Aggie loaded that would be cheaper.

I went to investigate. This is what I found: 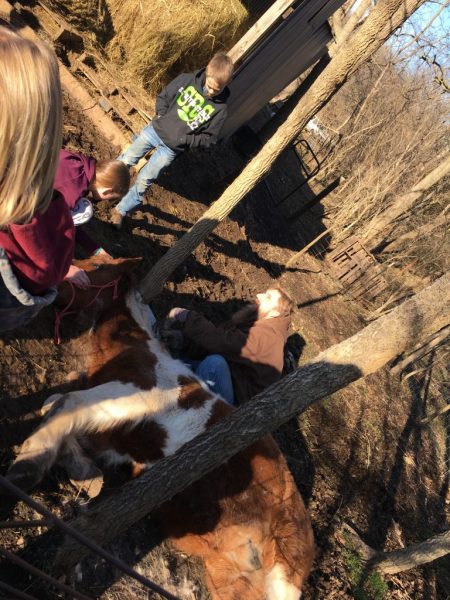 I stared at her round belly, heaving sides, and cringed. Then I looked at the trees on both sides of her. Praying I was right and pretty sure I was, I suggested that perhaps she was just stuck. We briefly attempted to convince her to move her head to behind the tree, and when that failed, we determined that the tree behind her head had to come down.

Thank the Lord it was Saturday and Blaine was off. I’m full of grand plans but cutting down the tree in my rotund state sounded like more than I was up for. Blaine and the boys went to work, cut the tree down, and still Aggie just laid there. They grabbed her front legs, pushed them up and over to roll her to her other side and get her more space. She attempted to get up, and her legs refused to cooperate. She ended up on the same side she’d been stuck on, and laid there helpless again, the hill slant not helping her.

Something about laying on her side for who knows how long – an hour or two at least – had her legs shaky and uncooperative. They grabbed her legs and rolled her over again. This time, she got her feet under her. She stood there for many minutes just shaking, then walked and walked… then laid down in the yard. And started farting. She passed gas for many minutes before I got nervous that she ought not be laying in such a position much longer because her stomachs can’t handle it. They got her back up, and this time she got up and did just fine. She got a good brushing and grazed happily for the rest of the day. Thankfully. 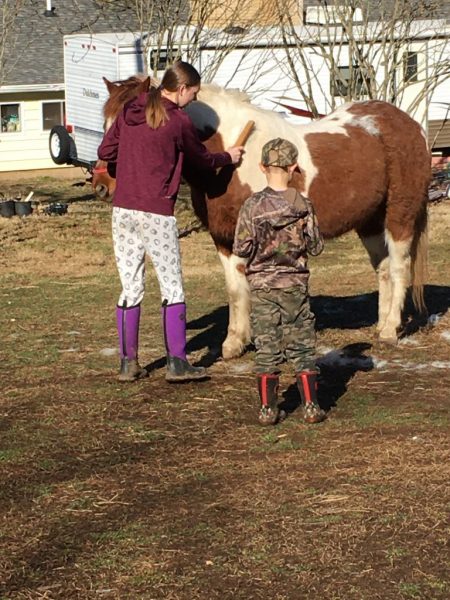 Blaine commented that he wasn’t sure he’d have figured out what was wrong with her. The mental scenario of calling a vet out for some astronomical fee and having him try to figure out what was wrong with the horse that merely couldn’t get the space for momentum to stand was comical- as was her passing gas nonstop for many minutes. Clearly it was a rough night for poor Aggie. Ladylike, she is not.

For the record, doe Mille birthed two doelings, Mara and Mizzle, and a buckling, Maynard. We name same first initial after their mamas. This helps tremendously in keeping track of things later. Mizzle got her name when I mixed up doe Hazel and doe Mille’s names, and Mizzle came out instead. And for the moment, Mizzle is living in my house and drinking from a bottle I’d planned to use for my baby. Rough life, I tell you. 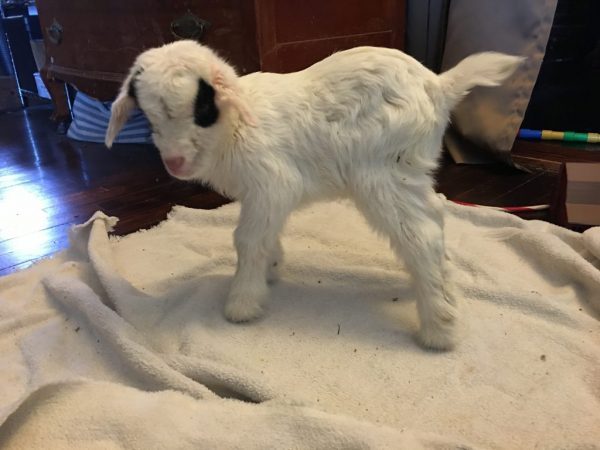 When Mille was birthing her third kid, she got it half out and seemed to give up. Eden got to assist and help deliver it. 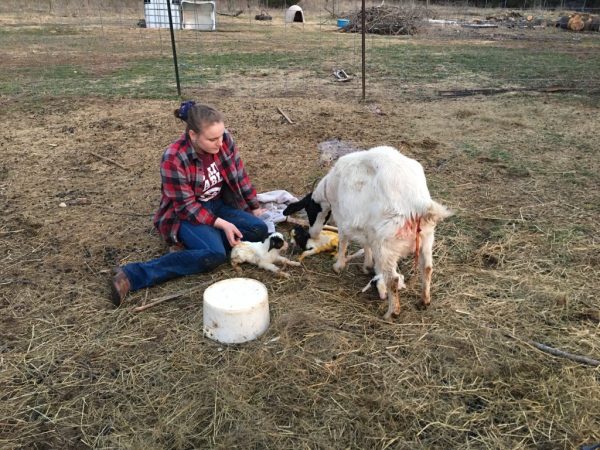 And that’s about enough excitement for a week. We had one wicked rooster that Sterling put down with great pleasure Thursday and gutted and cleaned him for the stewpot. He’s been attacking the kids frequently and was as mean as all get out. Time for him to go. Pretty sure doe Opal is not far behind Mille in gestation though, and Hazel is showing promise that she’s going to kid soon too. Hands on learning in science is plentiful lately!