We got home Tuesday evening without incident. I have yet to catch up since. Laundry is done, folded, and put away. I found a new dresser for the two littlest girls and swapped that out for the one that was no longer fully functioning. That turned into a far bigger project than I expected. In the end, four garbage bags of clothes went to donation, the room looks significantly more organized, and the three biggest girls now all have their own dresser. Sharing dressers worked for a long time, but as they get older and clothes are bigger, sharing meant a smaller and smaller wardrobe. I’m all for minimal, but it was getting ridiculous.

Friday night, we got to go to the rodeo at the fair. We had rodeo tickets but we’re supposed to pay for fair admission. Upon examining fair prices, the six oldest kids all decided they’d pay for themselves so that we could go. When we got there it was pouring. So. Much. Rain. They waved us in with free admission and free parking, saying they weren’t charging because of the rain. We ran through the rain to the wrong building, then to the right one about as far from where we’d parked, wringing out clothing when we arrived soaking wet. We were still drenched when the rodeo was over hours later… but it was so much fun. Memorable, for sure. 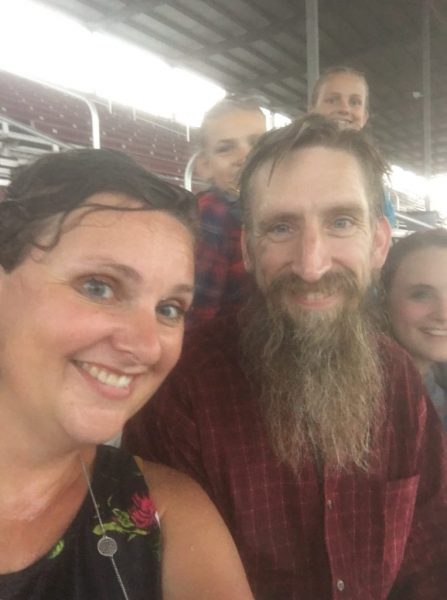 Tomorrow we begin a few subjects for the elementary ages. Elliot will continue reading. (She’s been doing this a little bit all summer.) She’ll begin math and handwriting. Pierce and Charlotte will begin math (except they dove in weeks ago, then got banned from it because Momma wasn’t ready for summer to cease) and spelling, English, and handwriting. We’ll take an easy run at getting a bit done before we jump back in with co-op at the end of August. The older four are in middle/high school taking core classes at co-op and Liberty is also dual enrolled at the local tech school for a couple online classes. (Hello, college algebra. Pray for the both of us.)

All that, and cleaning the house. Mowing the grass. Because I haven’t caught up yet. Wednesday is one of my least favorite afternoons of the year: nine dental cleanings. Friday, Stellan goes for an eye appointment. He seems to have a lazy eye when he gets really tired. Eden did this too… and she’s been in glasses for that since she was two. Eventually that corrected and then she needed glasses for plain old far sightedness.

For today: funnel cakes. Being at the fair the other night inspired Liberty. She’s been cooking for an hour, making each of us our own.