First morning at the campsite had me outside in my pj’s, watching Stellan on his bike. He was over the moon about flat paved surfaces to ride on. He rode back and forth in front of the camper, and had strict instructions to turn around before the hill. The hill was steep and headed straight for the lake. The road curved just before the lake, which was flooded really close to the road. 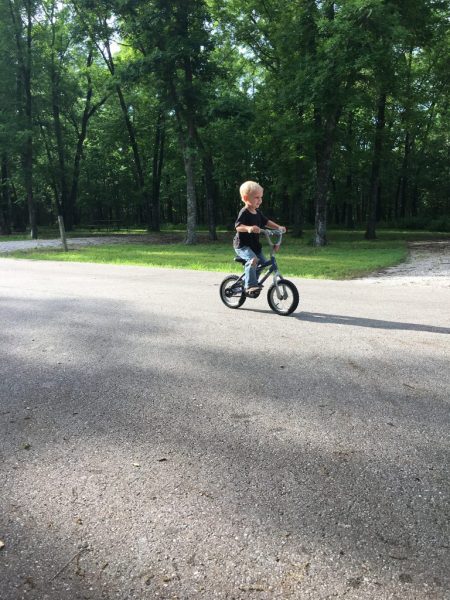 And then. He didn’t turn around where he always had, forgot how to use brakes, and went flying down the road at a scary pace. I went running after him in my flip flops, pajamas, fuzzy curly bedhead… hollering “brakes!!!” at the top of my lungs.

It was beautiful. Beautifully mortifying, that is. He stayed upright until he’d slowed a bit at the bottom of the hill, maneuvered the corner successfully, and then fell. I got there about then. He was unhurt and cried for a minute but calmed once he realized he didn’t die. And he never roads that little bike down the hill again… that day. He did have a minor skiff with it a few days later, but it turns out Sterling either reacts quicker or runs faster. Either way, he’s my hero.

I DO NOT run. Follow that run down the hill by me carrying both Stellan and his bike up that same hill, and I was struggling for oxygen by the time I got back to the camper. Blaine met me at the campsite with a “How was your morning run?”

Hilarious soul, that one is. Given he was in bed when my adventure began, I think he got up just to watch. And laugh.