Yesterday evening, after telling kids for the umpteenth time to get their bedrooms cleaned up, I finally resorted to “supper isn’t happening until they are clean”. The finally stepped it up. Moments later, I was trying to sew bandanna bibs for the baby that spits, because let’s face it, the bandanna is far cuter than your ordinary bib. I was on a quick mission to finish those before I needed to start supper and Stellan started crying. I asked Sterling to keep him happy for a few minutes while I finished, and wouldn’t you know it, he grabbed the baby and headed back into his bedroom. I heard a great game of I Spy going on in there, where Sterling, arms full of baby, pointed out random colors and shapes for Pierce to pick up. Pierce was actually playing… helping.

Sometimes, when you’re at the end of the day, you’ve repeated yourself dozens of times and are so ready for their bedtime, and you hear such camaraderie among siblings… you just take a moment to recognize that you might actually have accomplished something in this motherhood game after all.

Of course, this morning started out with an all-out pinching fight between two dear children when the one climbed over the bridge the other had created instead of under it. They had to remind me that my work isn’t done.

Today is Sterling’s birthday. He’s nine. Gifts are tonight, and I cannot wait. He’ll be so thrilled. In the meantime, I thought it would be fun to squish them all onto a single couch in their annual new matching shirts. (Even Stellan got one… it’s 2T because that’s the smallest they had, but it fits remarkably well considering.) I took several dozen shots and still… eight children looking all in the same general direction is the best I can do. They are all wearing “cowboy attire” in honor of Sterling. 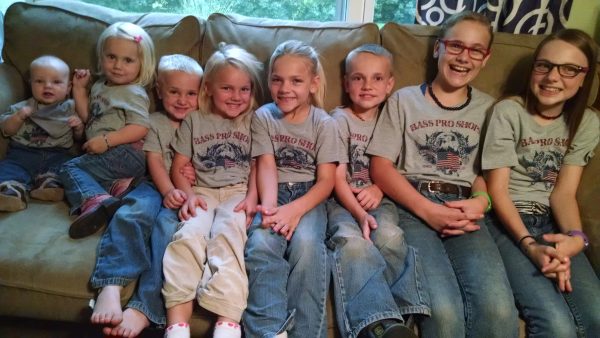 When asked what he’d like to do for his birthday, I was envisioning the zoo, the park, or the library.

He asked if they could have a mud fight. In the pasture.

So basically, my dear son wants permission to fling mud at his siblings and not get into trouble for it. Deep breath. Yes, you can have a mud fight. Yes, I just mopped the floor. Yes, I just finished the last load of laundry after having to pull out 3T for Elliot because her belly is suddenly protruding out of all things 2T. Go ahead and bring me seven sets of muddy attire.

I’ll sit here and drink coffee and brace for it. It’s been raining for days. Mud abounds. And yes, they have to change their new shirts first.