After a week’s delay and a trip to the mechanic to make the giant van road worthy, we’re in South Dakota this week instead of last. Since we started a minor stomach bug late last week, I thought it was a good thing to have waited.

I spent a portion of the evening on the phone with the nurse on call trying to decide if Pierce’s new symptoms are worth a trip to the ER. I’m so not the mom to rush off to the doctor for every little sniffle. Not sure what to think, but it’s likely a virus and we’re waiting to see what tomorrow brings.

Grandpa and grandma’s house isn’t Ellie proof. The sugar bowl was her latest victim. Eek. She had the grace to look ashamed for the photo at least. You know, before she licked her fingers some more. 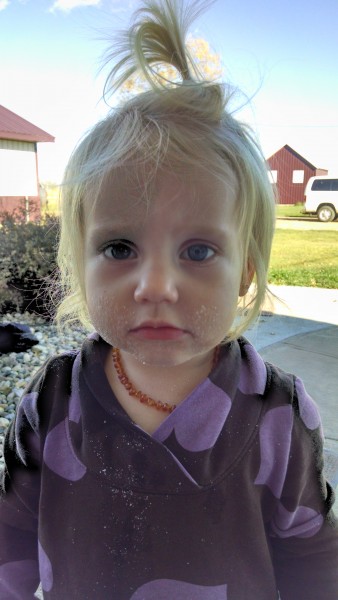 The nurse was desperate for a temp on Pierce. Grandma has little use for a thermometer – except in the dog kennel. The nurse said not to tell Pierce where the thermometer had been. He knew, but wasn’t fazed. Note to self: put a thermometer in the first aid kit in the van. I thought I was doing so good with salve, gauze, a crack-to-engage ice pack, and band aids. I can’t win.

We drove into snow coming into South Dakota. Blaine groaned. The kids cheered.

We head home Monday. Praying we go home illness free, that Pierce regains his usual energy – and that I don’t end up spending time in the ER for the second SD trip in a row.