We’re just surviving lately. It seems  we do a lot of that. It’s hot outside (But my lawn hasn’t gotten the memo with so much rain lately… going to have to address that today.) and we gave up (as in, I was going to lose my sanity and my husband addressed the issue for me) and we now have the central air up and running. It’s a beautiful thing. Except… now the kids love to be in the house. They’re squirrelly and not getting energy used up and, well, wow.

I haven’t done much more with potty training. We’ve been gone every day this week so far, and today she made it all the way to 10am before she needed a nap. Poor girl is getting the wishy washy approach. She loves to be bare bottomed but doesn’t love to sit on the potty. She had her checkup yesterday with the pediatrician and he looked me in the eye and said strong willed children do not potty train easily. I agreed, stated that Pierce, my other super strong willed child, took six months, and he told me that’s really a short amount of time. Well then. He also told me Elliot is going to be my most strong willed yet. I agreed. And then he said he’s going to laugh when we find out we’re having twins next month at my ultrasound.

We went to Chick Fil A with seven coupons for free chicken nuggets yesterday. We packed chips in the car, and I warned the kids before we went in they would be enjoying the nuggets in the restaurant but I wasn’t buying fries for all of them – that they could eat chips when we got back to the van. They agreed, enjoyed the nuggets, and then started… and finished… two whole big bags of chips between the seven of them. 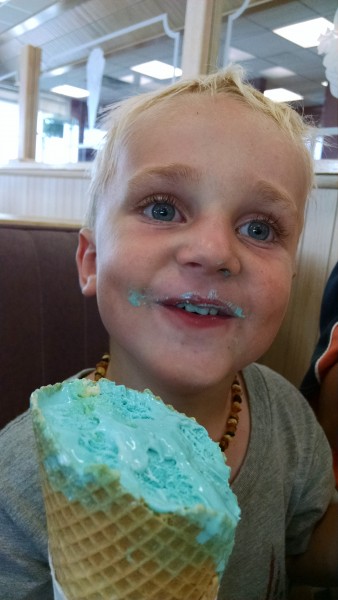 The dishwasher died. Liberty volunteered to always wash the dishes by hand and skip replacing the dishwasher. I don’t think she’d have made it a week. 8-9 people a meal depending on whether Blaine’s home from work or not, x 3 meals a day, means about 25 plates, forks, and cups a day, plus pots and pans. We replaced the dishwasher.

I took the kids to the fair last Friday. We had a great time, but it was hot. So, so, hot. I took them out for ice cream after, and Charlotte and Pierce both got birthday cake ice cream. I won’t elaborate on the details of what that much blue dye does to you… but it was interesting.

Now that I’ve procrastinated until the heat of the day, I’d better get outside and cut the grass.