We went to a birthday party for a friend today. Some of the kids got their faces painted. It was an amazing job. (Ruby and Charlotte said they didn’t want theirs painted… because they’d have to take another bath. Silly.) 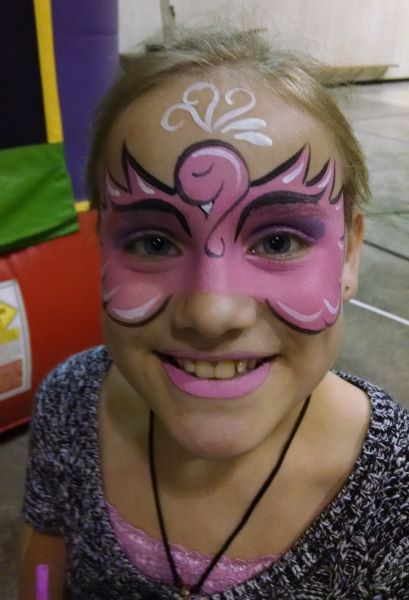 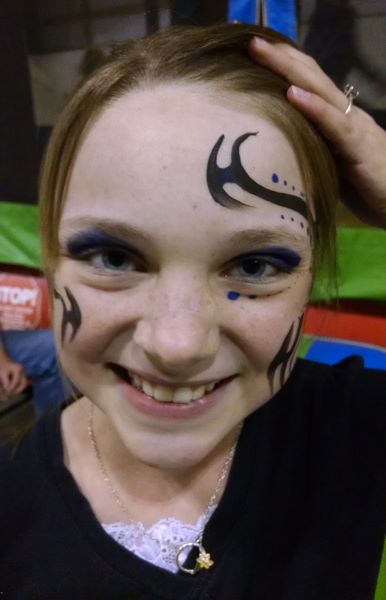 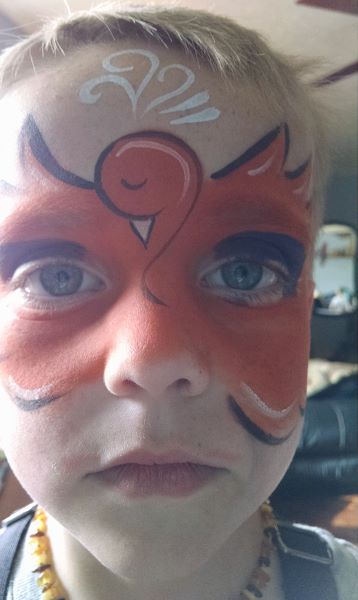 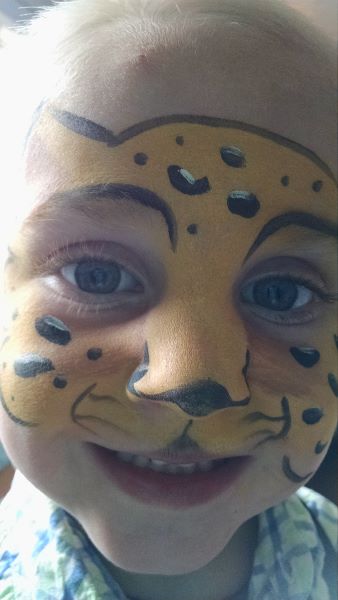 I made a dress for the birthday girl. Ruby is about her size and helped me size it right. She wasn’t super excited about wrapping up the new dress that fit her so well and giving it away. It was super fun to make something other than a baby carrier for a change though.

And then, we came home and I worked on another mei tai. Because, you know. I’m getting sick of them! Blaine suggested I use my earnings to buy a new sewing machine. Just like that, they take on a new light. Between sewing money and my Lilla Rose earnings, I can at least begin to look to see what I can get. I’m pretty excited at the prospect. My Singer has worked hard since I was in high school and is starting to show it’s age. Apparently it’s feeling very old.

Pierce walked into a fire extinguisher at the store. It clanked against the metal pole and made everyone jump – and now he has a welt on his head. Today, he announced he has a marble on his head. When I played along and asked him why he put that there, he touched his welt and didn’t miss a beat. “I (s)wallowed it and it went do, do, do, all the way up to my forehead!” Well then. The boy lacks no amount of creativity. 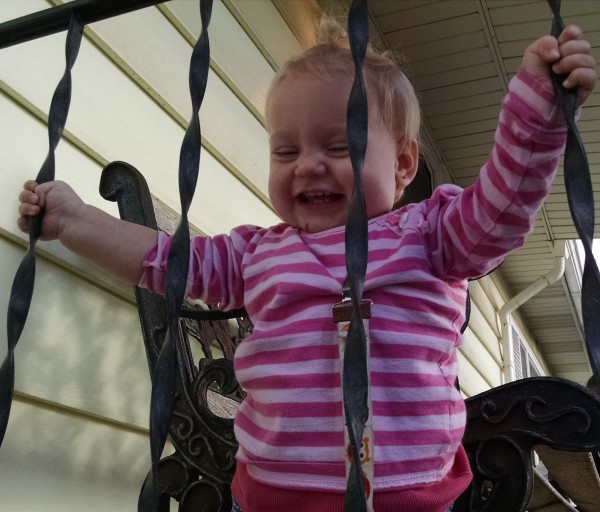 Ellie is pulling to standing on everything. Especially her bed. That’s created some interesting bedtimes. She’s quite proud of her new skill. Crawling remains something she refuses to attempt. Something about crawling along the ground rubs her the wrong way. She has more dignity than that. Or something. 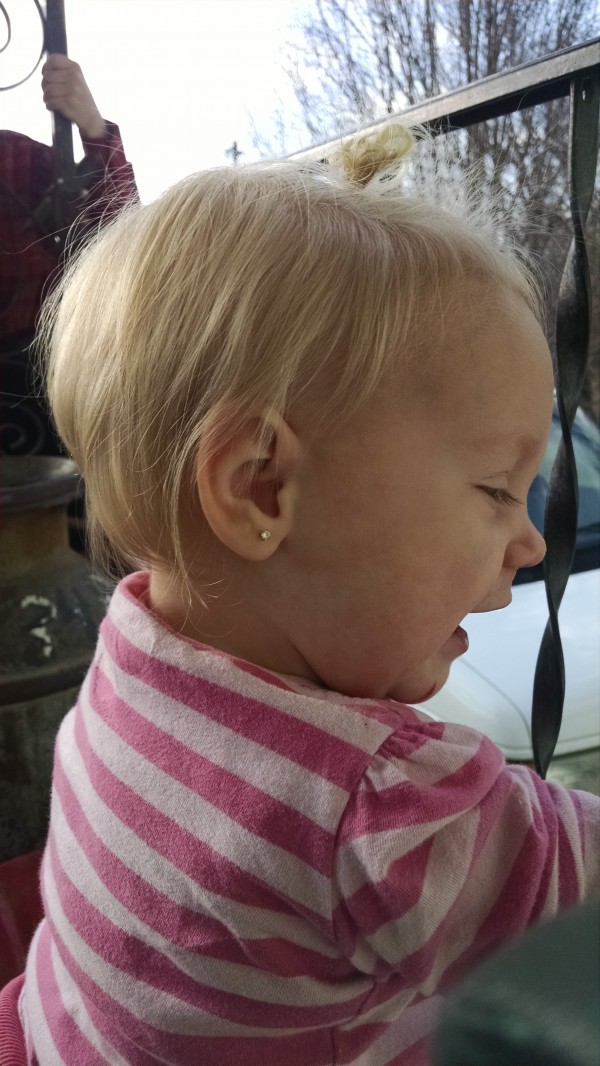 The front porch railing makes for a particularly fun place to play. She’s a nut. (Who fell in the nursery at co-op and got her first “I’m moving now” injury.) 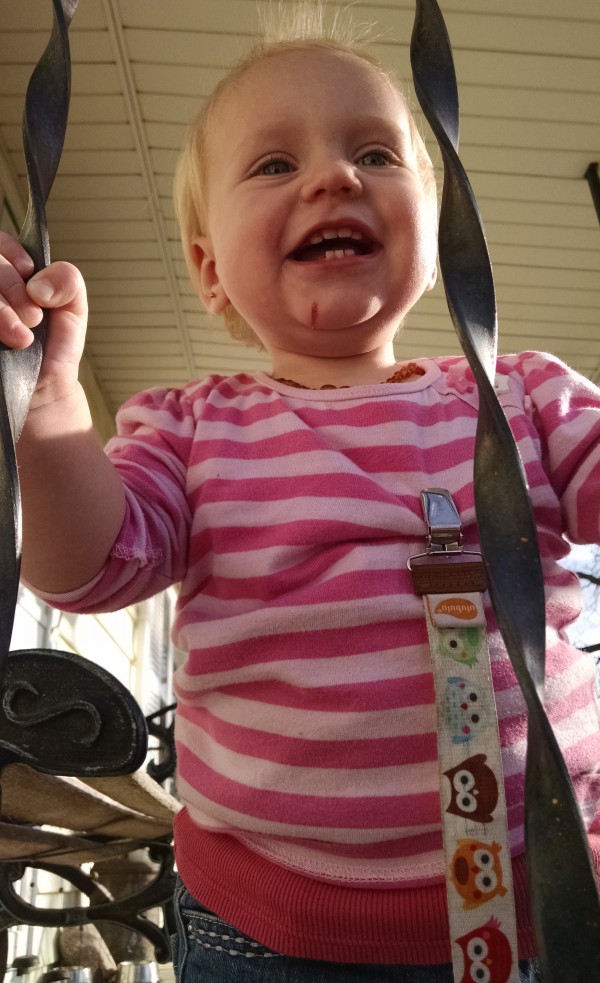 Those have been the highlights of my week. It’s been warmer and we’ve spent one day at the park, followed by one day that we thought we were getting sick when Pierce threw up before breakfast followed by acting normal all day. A zoo trip was cancelled and I was somewhat excited at the prospect of a day at home to catch up. Catch up I did not, but I’m further in the right direction and crossing things off my list anyway. My washing machine and my stove are both having fits, creating far more drama than I care to deal with. The question is this: the washer is three years old. Repair? Replace? Acknowledge that it’s lived a good long life in the world where you’re washing laundry for nine and retire it for a laundromat version? Such are the topics of conversation these days. The stove… Blaine’s going to hook up propane for me so we can switch to a gas stove. This thrills me enough to hold out with my one-burner-heats to a thousand-degrees-ever-time so I’m down to a three-burner stovetop, top-element-in-the-oven-out wonder until he gets this finished for me. In the meantime, I’ll keep making biscuits that have baked for 17 minutes, and are theoretically done and really ought to be overdone, but aren’t the least bit browned. (The fact that I just typed theorectally just now and had to stare at it to know what was wrong tells me it’s past my bedtime. But not without a good laugh on just what theorectally might possibly mean!) My recipe is from an Amish cookbook and doesn’t have a cook time. I’ve often thought I ought to time them to know how long to cook them, since the timer is the only thing keeping me on track with such things. I timed them. Thus, the knowledge that they cooked for 17 minutes and still weren’t browned. Then I decided to wait and time them once we have a proper oven before I make charcoal briquettes in a proper oven. In the meantime, I’ll enjoy my inability to burn biscuits. Roasts, on the other hand… I don’t have a clue what happened there. I’m blaming the stove.