Charlotte, age 4 (and nearly one half, she reminds me) has had a fabulous time playing with our Windows download game from The Critical Thinking Co. As part of the Old Schoolhouse Magazine’s Review Crew, we received the Alphabet Song Game for toddler ages through grade one to review – and Charlie’s been pestering me to play it ever since. It was a great game to put on for her while we worked on school, since it kept her busy and still learning too. We learned quickly to put headphones on her to minimize distraction for my older kids. There’s nothing so fascinating as that moment when someone is singing the alphabet – when you’re supposed to be doing math!

It downloaded quickly and installed easily – and now, Charlie can play it by herself entirely once someone opens it for her. That is a beautiful thing. She’s sung and clicked on letters for letter recognition dozens and dozens of times for as long as I’ll let her, and while I thought it would get boring for her since she’s beginning to read, it remains a constant request to play her alphabet game. 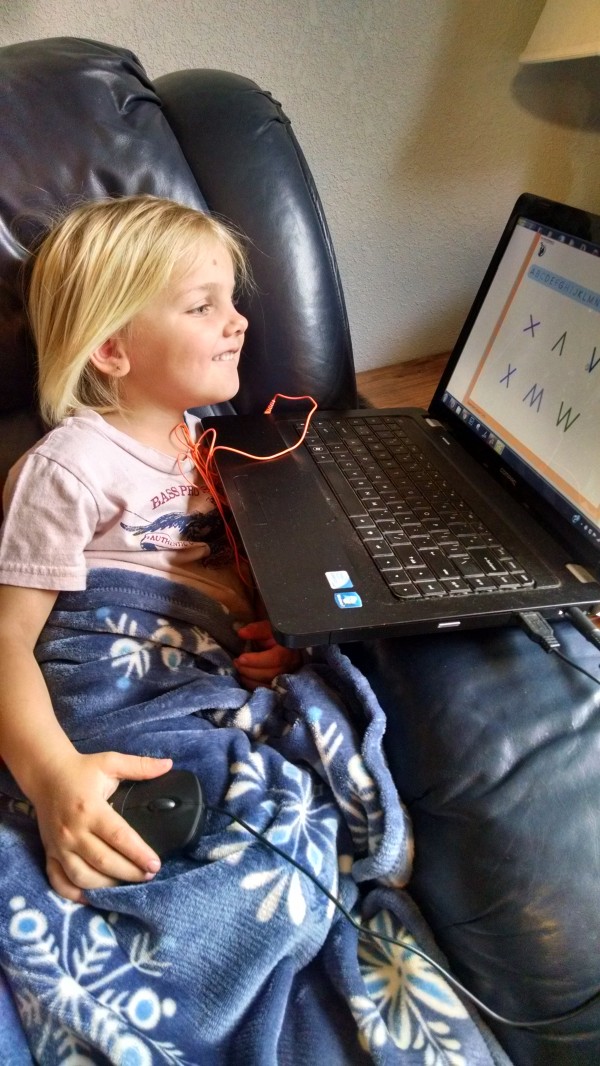 Designed to make children better problem solvers, The Alphabet Song Game is a well-written program that has had zero glitches as she’s clicked, played, and sang along with all 22 “lessons” – all different (somewhat, but most are pretty similar) games teaching letters in both upper and lower case. It sings the ABC’s at the beginning of each game, then moves into a game playing with the letters and naming them and putting them in order. After each activity it offers her to find something harder or do again what she’s just done, and she has a hard time moving on. Surely nothing is as fun as what she just did, right? I keep pressing her to move forward, but she’s loved and been capable of all of it. Per the game’s help section, if she scores lower than 90% she would only have the option to play the same game again. She rarely gets that option, so she’s obviously scoring well. I tried to find a place that told me what she’s scored on each game, but I cannot find that option for the game.

Charlie’s younger brother by a year is three (and a half!) and while he doesn’t know any of his letters, I’m about to throw him in the deep end with it and see what happens. I think he could potentially learn to recognize his letters with the game. (Or he could potentially break my laptop, because… it’s Pierce. That fear has prevented me from letting him try up to now. He’s just…. Pierce.) Charlie knew her letters pretty well but often couldn’t tell me what ‘W’ was, and she’s not forgotten lately. I’m pretty sure it’s the game. It’s helped her make a quick deduction of the letters she’s seeing and ‘b’ and ‘d’ have suddenly become accurately named much more often. I was concerned at first that the work with the mouse would be difficult for Charlotte, who’s had very limited computer time this far, but she caught on quickly and the game wasn’t super fussy about her clicking in exactly the right spot so long as she was close – so much so that I find her playing like this, with the mouse haphazardly on a blanket!

This is one that we’ll continue on with for my littlest ones, letting them learn to use the computer and mouse a bit while learning letters and having fun. The Alphabet Song Game is $6.99 for a Windows download, but it’s free right now! It’s also available in the Google Play Store for tablets and in the iTunes store. It would be a great game to keep to keep littles busy.