Four of my children have taken pacifiers. Liberty, Eden, Sterling, and Elliot have all had them and been quite attached. For each of them, I took it away during the day right around their first birthdays and then took it away completely around 15-18 months.

Ellie turned one this month. It was time. Except Ellie really, really, really likes her binky. And she has no self-calming abilities to calm herself down when she gets riled up. She needs the binky. 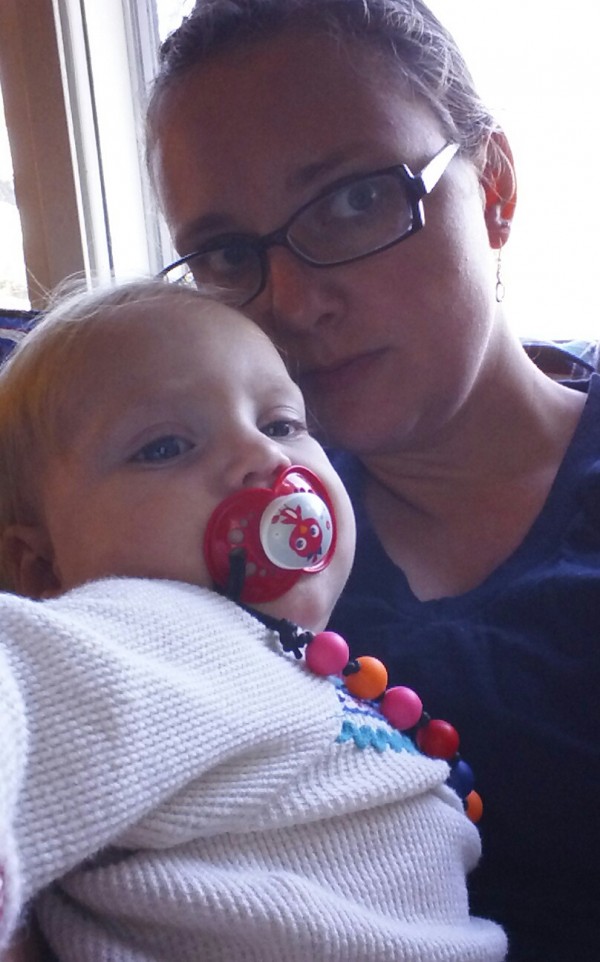 Sunday, when we were out for a drive, her binky somehow got left at home. She. Was. Mad. She cried. A lot. And then and there, I decided more of that sounded like a great idea and I decided to take it away completely – even at night, because this dear girl is an all or nothing kind of kid. Besides, I didn’t want her fussing during that drive to be for no good reason. We had momentum, it was time to get the ball rolling.

She went to bed without much issue. She fussed for a few minutes, but that’s normal. And I thought this was going to be far easier than I’d braced myself for. And then. She woke up around midnight. I nursed her back to sleep. She woke up around 2am. She nursed back to sleep. She woke up at 3am. I let her cry. Actually, crying is not really what I’d call this. It was a loud, high pitched, furious wail of a scream. It went on and off for hours. I contemplated that rubbery miracle drug we refer to as a binky that was mere feet away, knowing it would make it all better, and we could all get some sleep.

But I decided a long time ago I had to be more determined and strong willed than any of my children if I’m going to win at this game. So I held her and consoled her and kissed her and when I got fed up with it all, I scolded her. And she stopped. And then started again. And I scolded again. After about fifteen times of this, she went to sleep. It was 5:30am. She slept and slept and slept. She napped Monday without issue. We went to the zoo, and I wore her on my back for hours. She always wants her binky when I wear her. She didn’t even whimper. She just went to sleep. Monday night, I cringed, hoping for a better night. She slept 8pm-7am.

Today, she was furious at nap time. No tears, just oh so mad. She figured it out though. At co-op today, she was eyeing up a fellow nursery-mate’s binky, but she didn’t take it. She slept on my back again, this time with a minimal protest.

I have to say, sometimes my kids disappoint me. I expect such a fight from them, and they give in. I may have a reputation for holding my ground around here for sanity’s sake, but I really didn’t see this being easy. It hasn’t been – but it’s been easier than I expected. It has had an unexpected side effect: She wants to nurse more. All of my others weren’t nursing anymore when they weaned from their binkies. Ellie has been slowly weaning from nursing, and I wasn’t sure I was ready for her to be done. Just like that, she’s suddenly interested again.

Now though, my reputation is shot. My children see me as a villain because I made the baby cry. I’m so mean, I take binkies from babies.