Life has become mere endurance. At 32 weeks pregnant, I’m miserable beyond words. I. Hurt. Everywhere. But, baby kicks and rolls and from all appearances is doing fabulously. I was warned by my midwife to expect this one to be bigger than all my others, since he/she is already larger than most. My heaviest was 9 lbs. 2 oz. so I’m rather expecting to birth a three month old at this point. The constant question is whether I’m positive I’m not carrying twins, how sure I am of my due date, and if I’m done. Oh, and one particularly fun comment about being like one of those prize pumpkins that never stops growing. I hold onto the knowledge that I won’t be pregnant forever.

I bought new fabric for pillows. We might, by the end of tomorrow (because I need another pillow form, so that’s been added to today’s grocery list) have matching pillows on our not completely mismatched couches for the first time in history. I’m rather excited about this. No, it’s not nesting. I purchased the fabric the day after Christmas. Christmas sewing and dread for getting on the floor to cut out fabric had me putting off the sewing until now. But if my living room could be more intentional, that would be fun. Of course, the Lincoln Logs, the train set, the car basket, the Legos… it’s a toss up on whether I can win this battle.

Pierce got a handful of Tonka toys for his birthday last year. Sterling has had a dump truck since he was about two, so when I found a bunch of them on Craigslist, Pierce got them for his birthday. He loves them. They had, however, been used in the sandbox and lived outside or in the shed. Sterling begged to bring them in for Pierce when it got cold, willingly put them in the tub and scrubbed them until no sandbox remnant remained, and made his brother one very happy boy. My living room/school room now looks like this on a continual basis: 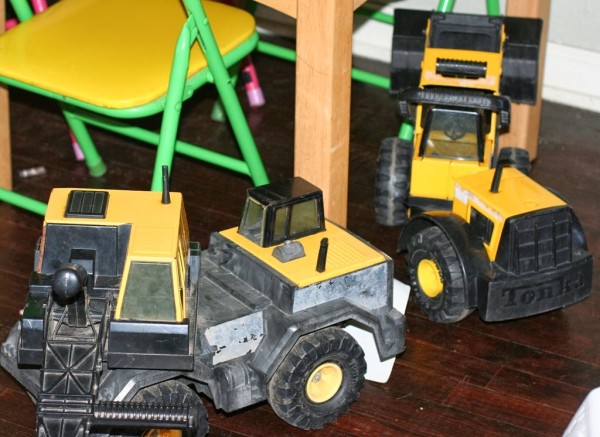 I’ve decided Sterling is just trying to balance out the boy toy/girl toy ratio. Or kill me, tripping on large wheeled toys in the night. Take your pick.

I told the kids to get ready for the day. The day consists of school and grocery shopping. Sterling feels like he’s headed into battle, apparently. This is what he came up with.

Last night I made barbecued pork ribs and baked potatoes and our own canned green beans for supper. I got all the kids’ plates dished up, and Ruby went to the garage fridge for more milk. She plopped the brand new gallon of milk down… on the edge of Sterling’s plate. Just like that, potato, beans, and pork rib went flying, catapulted toward nearby Pierce and the floor. Some of it landed on the table, some landed on the floor, but that rib simply disappeared. Brady (the dog) was not so very far away, and the fear that she’d snatched the meat was voiced. Even if she had, a pig rib vs. an eight pound dog seemed like an unlikely match. Surely something would be left. She can’t eat a bone that big that fast. And so the search continued. Everyone’s plates were checked for the extra portion, but no one found it.

It struck me as awfully funny. Eight people, searching floor, plates, counters, and curtains for one catapulted rib.

Finally, I spotted a bit of the sauce on the back of Pierce’s chair, and his chair became the focal point of the search. The rib was behind Pierce, on his chair. Supper was saved, Brady was innocent, and the idea of catapults was discussed.

Pretty sure I’m not going to forget the food flying through the air, plate and all, anytime soon though. Supper around here is never dull… but that was a new one, even for around here.