My dear youngest son is giving me gray hairs. 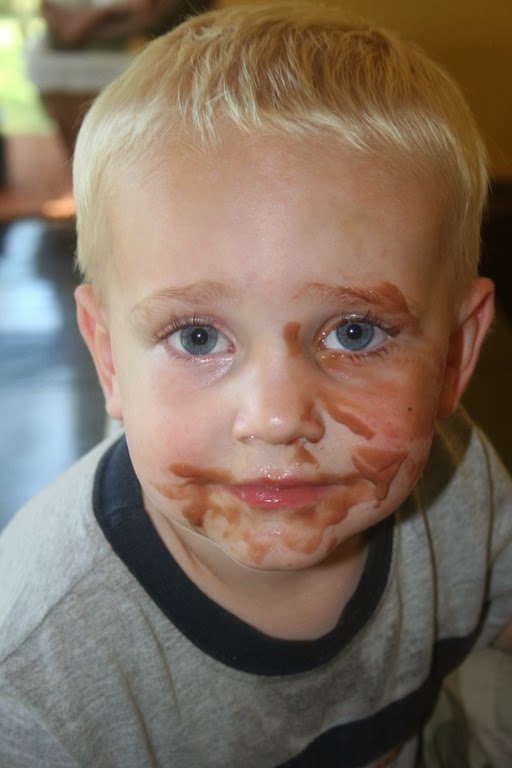 Last night, he asked for a banana. Sure. He chewed it up and spit it, systematically, all over the kitchen floor.

This was after he went grape stomping. All over the kitchen floor.

I set to mopping up his mess, and sent him to the bathroom to brush his teeth. Bedtime needed to happen. Soon.

I found him, minutes later, sitting in the bathroom sink. The water was running and he was drenched – clothes and all.

Near tears in my exhaustion and frustration and anger at this point, I sent him to bed.

I don’t typically mop on Sundays. I was left no option. Entering the kitchen wasn’t an option until the whole thing had been scrubbed.

Today, he dumped the crayon box. Then he dumped his milk – that he’d gotten out of the fridge and poured himself – on the mopping job of yesterday, of course. Then he played in the dry oatmeal and ate it. Twice. He dug through the candy drawer in the fridge. Twice. I was running from one disaster to the next, unable to keep up or slow him down.

You know those kids you see in the store, and you wonder why on earth his mother isn’t DOING something about his behavior?

I have one of those. I’ve DONE a lot of things about his behavior. Some days it helps. And some days, I just count a few more gray hairs at the end of the day and wonder what lesson God’s trying to get through my thick skull that I’m not getting.

The only sacred place is his bed. For now. I get approximately one and one half hours a day to catch up on the messes he’s made before he’s back out, feeling like a new boy and ready to go again.

I’m worn out, huge pregnant, (and keep getting comments about being due any day. I’m 22.4 weeks.) exhausted, and praying my stubborn streak outlasts his.