I was in a dressing room, trying on a purple maternity dress. Charlotte tagged along.

“Mom! That dress matches your glasses!”

Yes. Yes it does.

“It matches your…” she searched for the next purple item she could name. “PANTIES, TOO!”

Could you say that a little louder, dear? I’m not quite sure the cashier at the front of the store heard you. From the chuckles outside the dressing room, the other ladies shopping nearby certainly did.

One dear boy helped his big sister lick out her birthday cake batter bowl. I’m pretty sure he got some in his mouth. Wouldn’t know it by looking at him though. I’m going to take heart between the two faces, and remind myself at the difference a year makes. 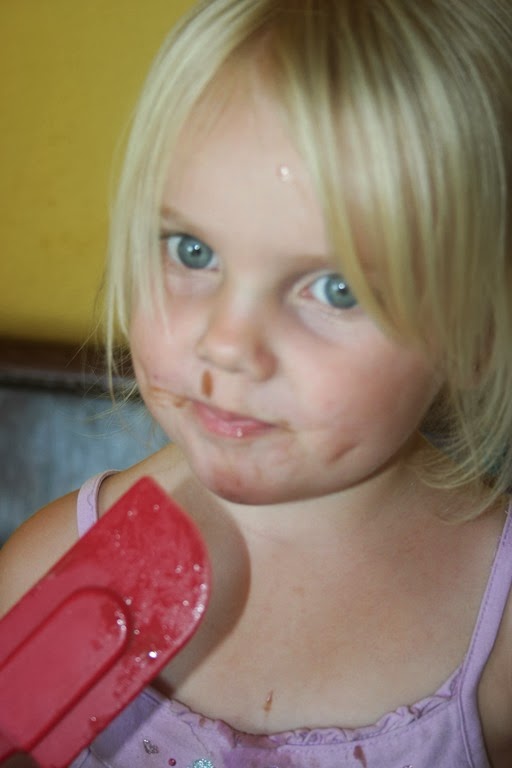 Today: Three grocery stores, six children and I, 1.5 hours, a week and a half worth of groceries, tp, and cat food, $200. That might be a new record for time. Between that, and Pierce actually holding onto the cart the entire time he was instructed without failing to obey (down to almost walking away to get in the van and remembering, saying “Oops!” and heading back to his post) it was a day for record-breaking. Maybe that’s why we got done so quickly, come to think of it!

One of my dear children, to remain nameless, was questioned this morning regarding MIA daily 100-problem math timed tests that had been assigned. Turns out, this dear child opted not to do them, pulling the perfectionist card out of the repertoire of bad excuses. “I can get a good score, so I didn’t want to do them. So I didn’t.” How didn’t? 14 lessons didn’t. Between those, the extra lesson that had been assigned but not completed, and the four chapter tests also mysteriously opted out of, one dear child has roughly 1,400 math problems to make up. It makes my head hurt just thinking about it. Today: half done. I’m scared to correct them, for fear said child’s brain opted out of complete operation after all that. Sometimes being the parent and the teacher just stinks. It’s stinking hard to leave the frustrations of our school day during school hours and move on in the evening.

Liberty was conjugating verbs. “Have boughtended?” The sad part was, she looked at me, waiting for my nod of approval instead of realizing her error. She realized it shortly after, however – when I snorted.

I told Sterling to grab his math book today. “Why?” he questioned.

“To do your lesson,” I replied.

“Yeah, fine, but we need to do your lesson. You’re learning about measuring today.”

“That math book is weird, Mom. I already know how to measure. They want to teach me things I already know. I did that page too. Why are the people that wrote that book so weird? That stuff is so easy.” And he had done it. All of it. To perfection.

Tomorrow, we work on humility.