As part of the Old Schoolhouse Review Crew, I’ve been reviewing God’s World News, receiving their magazine for grades 1-2, Early Edition, and full access to the grade level I received at their website www.gwnews.com, and new websites www.kids.wng.org, and (should I have received a magazine on the teen level) www.teen.wng.org.

I requested Sterling’s age level, Early Edition. He’s six, in first grade, and reading very well. He’s devoured his magazines that he’s received so far, and told me over and over of the stories he’s read. The first morning after the mail came with his first issue was awesome. “Mom, did you know?” “I found ___ on the map.” “Mom, where’s ___ on the map? I can’t find it.” His first issue (September’s) came with a map to use with each issue, and oh, my word, has Sterling had fun with that. He’s studied it at length, finding all the states we’ve lived in, been to, countries he’s heard of, places he’s read about in his magazines. I have a feeling that thing isn’t going to make the year. We talked of hanging it on the wall, but he informed me he would not be able to look at it as well that way. Well then. 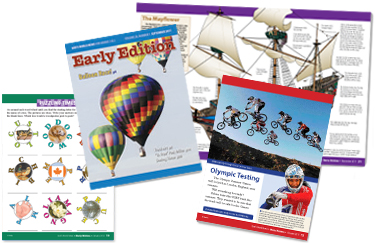 The magazines each contain 24 pages. They are colorful and printed on thick newsprint from what I’ve gathered. Amazingly, they haven’t ripped or fallen apart. I’m impressed, after what they’ve been through.

The website access is amazing. I’ve spent several hours on there and barely scratched the surface. Back issues of all God’s World Magazines (including World, one I’ve read some online and always in the eye doctor’s office, and have been thoroughly impressed with their views and vantage points. Plus… we have a writer from World in our own congregation. It’s a fabulous magazine. Unfortunately, our entertainment budget remains at $0 so we’ve never subscribed. For now though, I get to read it online. I was thrilled when I learned this – and further thrilled when I could “add” family members and added Blaine, so that he may read with his own username and password. Ah, it’s the little things. 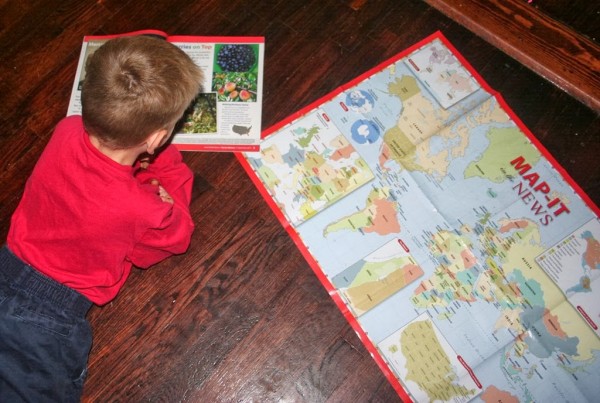 The answer keys to quizzes in the magazine (during the school year – no quizzes in the summer) are online, as are extended news lessons, biographies in PDF form (I found one to use this week, was all excited about it, then my computer shut itself down and lost it. And just like that, what was it about?! Live and learn. Bookmark. Download. Now I’ll have to find another one to use. There’s 120+ to choose from – it shouldn’t be hard!) Weekly email newsletter Teaching God’s World News is available to subscribers, and is the easiest way to access all that I’ve mentioned.

Chalk it all up to say, we’ve thoroughly enjoyed Early Edition and all the online content that goes with it. Sterling is thrilled to get a magazine in the mail just for him, I’ve really appreciated all the articles inside, and I’m so excited to be able to read many of the other offerings online. The news chosen for Sterling’s magazine has been in good taste – I assumed it would be, knowing what I know of the adult magazine, but it did not disappoint. Sterling is getting a taste of the world and what goes on around him in a format I really appreciate, from a Christian worldview I also appreciate. Awesome.

To read more reviews on Early Edition and God’s World News’ other magazines available for the young reader to young adult, check out the Review Crew Blog.