Life took an interesting turn earlier this week. A cluster of things happened at work that I won’t expound upon, but in the end, Sterling, Eden, and I are all no longer working at the cafe. Life has been weird for a long time – things I never expected to experience, and this one ranks right up there. Reason for leaving: moral conflict. That’s all I’ve got. 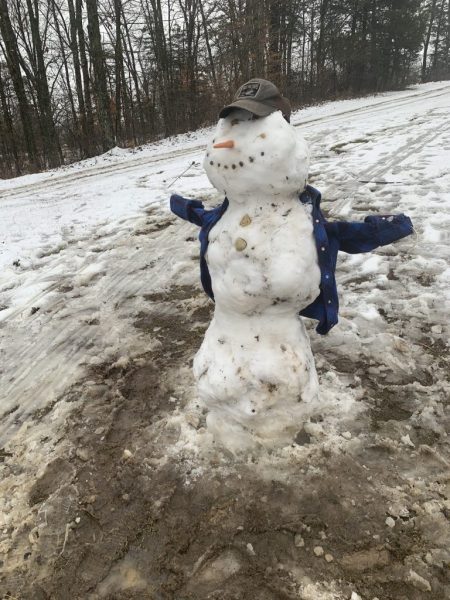 Unrelated snowman that kept the kids busy for a long time yesterday afternoon. I’m wondering if that shirt and had will survive…

Thankfully, long before everything happened, we’d begun looking for employment elsewhere. I think I’ve had nine interviews now, two of which were second interviews. I now have five job offers, and am waiting to hear about my last interview yesterday. I’ve taken a competency test for a 911 communications/dispatch job and scored 95%. That’s the last interview I haven’t heard about. The department of corrections, the department of revenue, and a few private businesses have offered positions. And now… I don’t know what to do. Each job is super different than the next, and each offers different hours, and I don’t know what to choose. With nothing nailed down it’s hard to know what will work best.

Eden went to an interview at the department of corrections as well. I chose to apply to be an accounts clerk… she chose prison guard. She has to be 18 first, so she has an 8:00am appointment on her birthday in a couple weeks, when she’ll officially be hired. She’s over the moon. I have so many reservations. This parenting older teens/young adults business is weird and hard and so very complicated.

Blaine has job decisions in front of him as well. I’m so praying this all gets ironed out today. I’m longing for stability. New jobs are never fun to begin, but if we can figure out a routine, that would be so much better. I’m tired of weird.