A woman I knew many years ago used to refer to the events of life as the playing out of the story God wrote for each of us. It’s stuck with me, and struck me more than once when circumstances played out in what could only be understood as ordained by God. When it seemed evident that His hand was clearly organizing details beyond our control, it struck me time and again. This is the story we’ve been given. What a gift.

When we started looking at putting Blaine through school to get his commercial drivers license, and we found one that didn’t require time off work, we felt led. This was where to start. When he needed to have his high school diploma to begin, and searching for it took hours, but I found it in time to enroll, it felt merciful. When he needed a birth certificate with more information than the one he was issued had, but we found a DMV that felt it was sufficient, we knew we’d been shown grace.

When the new certificate I requested would take months because the state was still shut down from an epidemic, but another avenue was shown that got it to us a week later, we felt like, once again, we were on the right track. When a neighbor asked to buy our house, we knew we had made the right decision. It was even easy to see when the time frame for our leaving was delayed by a struggle to pass the CDL test. It seemed like we weren’t supposed to leave yet, until it was time.

I made a trip north to look at a house for sale. It wasn’t at all what had been advertised. We got to my parent’s house in South Dakota. Waited for the next obvious step. Had a baby. Waited more. Looked at a house that we wanted to buy, but then found out the owner misunderstood and didn’t want to sell. Refreshed realty websites many times a day, certain that God had the perfect home there for us.

We wintered at my parents. Twelve extra people in their space was not fun, for them or for us. We needed a home. Nothing on any amount of land in the country came available for what we had budgeted. Prices skyrocketed instead.

Those moments have me seriously questioning what step we should have taken. Why everything went so well, until it didn’t. Throw in Blaine’s hatred for the weather there and South Dakota was not where we were supposed to be.

We left my parents home in August, taking the camper back to Missouri to try to figure out what is next. We’ve been here for a month and a half, looking for an area, a house, a job, moving around now four campgrounds. The kids are on the greatest adventure. We started school this week, and that has added a bit of structure to our days. We’ve visited the Mississippi River, several places on the Missouri River, and seen some super quaint towns. We’ve swam and fished and played in parks. Being back to just our family has been so good – except we left one in South Dakota. It leaves a hole, an “I wish Liberty could be here for this” and an emptiness that hovers. She came for a week, and the relief that settled was tangible. 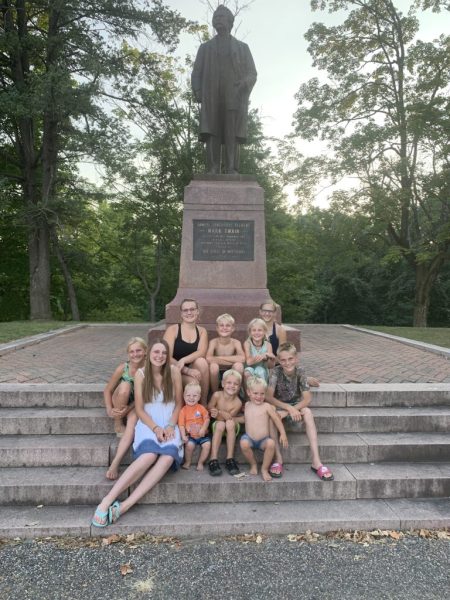 I think we’re closer to figuring out where home is. I hope and pray that we are. If I’d have known last year what this one would hold, what this chapter had in it, I’m not sure what I’d have done. Ran away, likely. It’s not been a fun one.

There are acreages here that we can easily afford. We came within seconds from making an offer on one. Walking away was painful.

I’m not sure what all I’ve learned. Appreciation for the simplest of things. The idea of belonging is merely a dream right now. I’m not sure I can even explain that. I know that feeling like I belong is something that will often escape this life, in reminder that eternity is ahead. I long for a little piece of that now though. This story isn’t finished yet. I’m thankful for that.