Creed was playing on the front step yesterday when he got ahold of a tiki torch and drank the fuel. I don’t know how much, I don’t know why the torch was there – it hadn’t been and no one is confessing to having moved it there. Regardless, what followed were some of the scarier moments of motherhood. He was hysterical, stiff and crying, eventually threw up, then calmed some but his breathing was ragged. His vomit burned on my skin where it hit me. His throat/stomach had to be on fire. Poison control said just to keep an eye on him but as he got worse, I took him to the emergency room.

More vomit, diarrhea, fever, and “elevated carboxyhemoglobin” ensued. He went onto oxygen for an hour to clear the toxins faster, and he perked up a lot at that point. An X-ray showed irritation, likely from vomit and not from having aspirated the tiki torch fuel, and six hours later, we headed home. He slept decently, broke his fever early this morning, and was napping again a few hours into his day. We’re watching for pneumonia symptoms, but otherwise, he seems well. 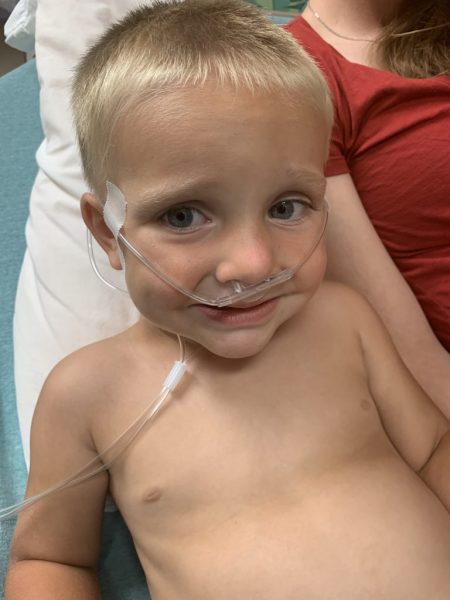 That was really scary.