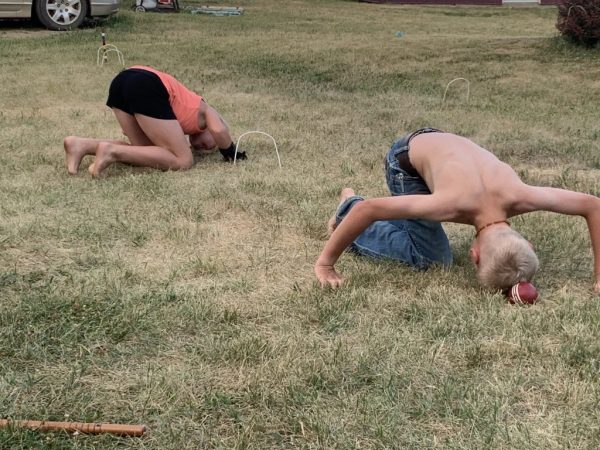 Grandpa: “You should try playing croquet with your heads.”

I’m pretty sure he never thought they’d take him up on it. Pierce and Charlotte gave it their best go… and walked away deciding it was not that fun. It provided some funny entertainment for several minutes though!

In the midst of hot summer days, the boys are having a blast in the gravel driveway. Grandpa had far more sandy gravel on his driveway than we ever did in Missouri. The gathering of blond boys with new summer haircuts convenes: 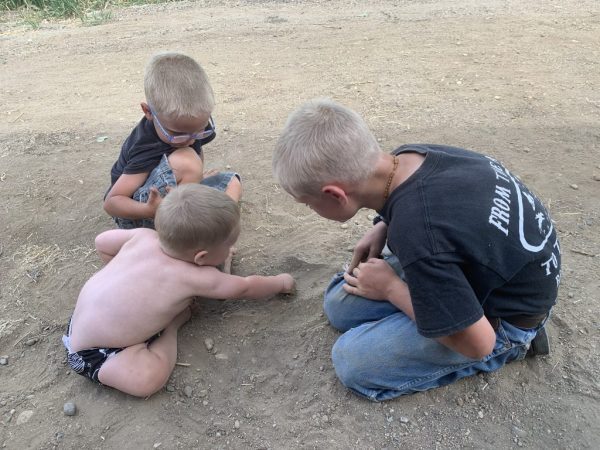 Now, to convince Creed not to eat it.

Confession: baths have mostly consisted of throwing them in the pool after. No one seems to care and I’m tired.

The days are hot, long, and full of bike rides and playing on a dirt pile in the pasture. South Dakota dirt is referred to as potting soil by my children. Dirt that is black, rich, and without rocks is a foreign concept after Missouri. They have so much fun with it. The kiddie pool has been patched more times than I can count, and the trampoline is up and kids are chomping at the bit for the replacement net to arrive so they can play with it again. The last one got ditched before we moved. It had major issues.

This summer is nothing if not memorable.

Blaine’s job search has begun. So has Liberty’s. The house search continues. We’ve attended the two church options here and struggle with what the answer is there. My third trimester for this pregnancy started today. Eden’s working at the cafe I worked at 22 years ago. She’s meeting people who recognize her because they knew me. Bible camp is next week for Eden, Sterling, Ruby, and Charlotte. It’s Charlotte’s first year. Eden will drive them six hours across the state into the Black Hills to camp. Liberty is taking two online summer classes at the tech school in Missouri and doing well. She made chancellor’s list last semester with all A’s. Creed is pulling up to stand on everything. He’s crawling fast. He pulled a side table over onto himself today, lamp and all, then just laid there waiting quietly for someone to rescue him after the initial yell of fear when he went. Baby boy is growing up.

We sang “Crown Him Lord of All” at church Sunday. Stellan exclaimed afterwards, “Whew! That was a lot of ‘brown hymns!’” When I tried to explain the lyrics to the hymn, he just looked at me confused. My work is not done.

Creed has not woke up for a bottle in three nights. Woke up hollering, yes. But he didn’t require a bottle to go back to sleep. He has not had one during the day for quite awhile. Tonight I’m going to pack them away and be done with bottles completely. Pray for me. The boy hyperventilates when he sees the bottle. He loves them. He moved out of the bed with a sibling and into his own bunk bed in the camper a couple days ago. He’s not thrilled with that development, but it was time.