A couple weeks ago, my van broke down. We were on the interstate, in the dark, on the way home from our homeschool co-op. The older four kids were at a friend’s house, so it was me and the five littlest. The oil light came on, things were weird, and I pulled over, fearing an oil leak and ruined engine. I checked the oil, checked the serpentine belt, and decided both were fine. And it wouldn’t restart. Blaine came with his van, I towed him to the nearest exit, and he charged it up enough to get it home. By the time he pulled into the driveway, his headlights were out. The alternator was done. Blaine and a mechanic friend out a new alternator in, and I was on my way again.

For like two weeks. Then, in grand fashion, it let me know the transmission was also done. It died at every stop, and I found myself praying for green lights through town. Once I hit city limits, there’s no stops, but it  took forever to get there. Once I hit country roads, it kept throwing new and exciting symptoms at me. By the time I pulled into the driveway, the kids that had stayed home were running into the yard to see what on earth all the racket was about. Uh, that would be the van.

So the transmission is a bigger fix than on our little patch of concrete in the driveway. I called AAA, thankful for that service, and they hauled the van off to our mechanic friend one super icy morning. It’s been there since, about a week and a half now. Parts are in and Blaine is headed up to help put it back together this weekend. 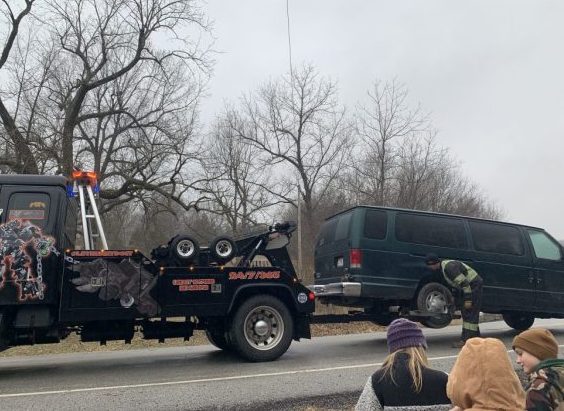 It’s taught me a few things. I hate broke down vehicles. I haven’t been stuck on the side of the road in about 17 years. Blaine keeps our vehicles, old as they are, in good working order, and I’m so thankful. A number of years ago, when our family size was too many to fit in anything but a large van, we determined that two vehicles that fit us all is a good, good thing. When we run older vehicles, there’s bound to be some maintenance. This way life isn’t interrupted too much when that happens. I’ve been super thankful for the 12 passenger van that Blaine typically drives. We all still fit. My stroller doesn’t fit in the back, and the swing-out doors are far more complicated than my van’s sliding door. Those things make me look forward to getting my own van back all the more. But… life has gone on just fine. Blaine’s driven his giant flatbed dually stick shift pickup. The thing roars, and I joke it’s his midlife crisis purchase, but I have to admit, it’s been super handy to have around, moving hay bales and hauling wood. And when needed, commuting!

And, in case you wondered, Stellan thought the tow truck was super cool. He’s been towing his own toy cars ever since.