I took the kids roller skating today. It was supposed to be just Liberty and Eden skating, and I was going to kill two hours elsewhere while they skated with friends. The trip there and a bunch of random events had us discussing changing plans and everyone skating instead.

I asked if everyone had socks on. Yes. You’re sure Stellan does? Yes. You checked? He has boots on.

Doesn’t mean a thing. Take the boots off and actually check. (Small observations here: My kids don’t pay attention at all. Stellan routinely puts his cowboy boots on without socks. As in, anytime he dresses himself. So… pretty much every stinking day. He views them as optional. Underwear are also optional, and if I dress him and actually put them on him, there’s no guarantee he didn’t leave both undies and socks in the bathroom the first time he used the toilet. Always check. Co-op and Awana teachers frown on commando two year olds. Ask me how I know.)

Nope. No socks on Stellan. Shocker. We had just sorted out clothes and had bags in the back for donating. Any chance there’s socks in there? We get to the skating rink and begin digging. Tights. Pink, purple, and orange tights are in the bag. Tights it is, dear boy. You’ll have a greater sympathy for your sisters after today.

Liberty takes Stellan to the bathroom to put the tights on under his jeans. She comes back out shaking her head. Refer to my earlier observation… he’s flying commando under those girly tights. 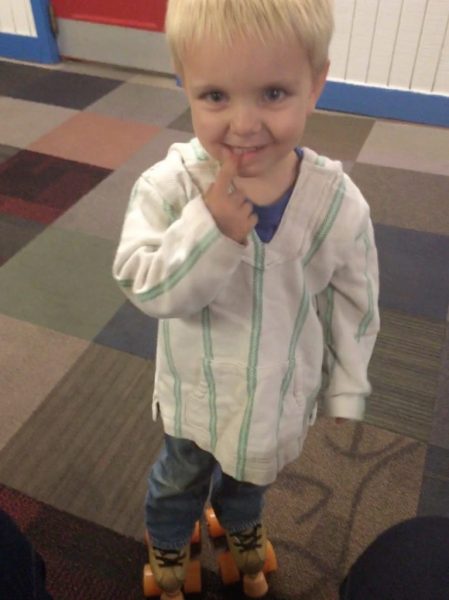 We spent the next two hours with nine of us each of us on four wheels. I hadn’t been since last summer on the bike path, when a child tripped me up and I skinned my knee. Liberty and Eden skate often and are pretty decent. Stellan was remarkably good, confident, and off on his own within minutes of being on roller skates for the first time. Elliot and Ruby were the nervous ones, but they got better as they went. The others picked it up pretty fast. They all have roller blades, but only Liberty and Eden brought theirs from home… that whole impromptu skating thing. Several kids made it into the final rounds of playing Limbo. When we got home, I explained the rules to the game. I had kids making it under the first round and leaving, having no idea there were multiple rounds and the stick would be lowered. Homeschool social life failure, right there.

I stayed on my feet, for the record. Didn’t try for playing Limbo, but I lapped that rink dozens and dozens of times. I kept wondering if it was going to turn into a big mistake, but I held my own.

Guess what’s now on my bathroom floor though?

Tights. Pink and purple tights, in a wad.