We got home from Virginia in one piece. There was a sketchy moment five miles from home that we very nearly didn’t stay in one piece, but Blaine did some fancy ducking and swerving and braking and screeching and we somehow drove away unscathed. I have enough adrenaline from that one I’ll have headaches for weeks to come. 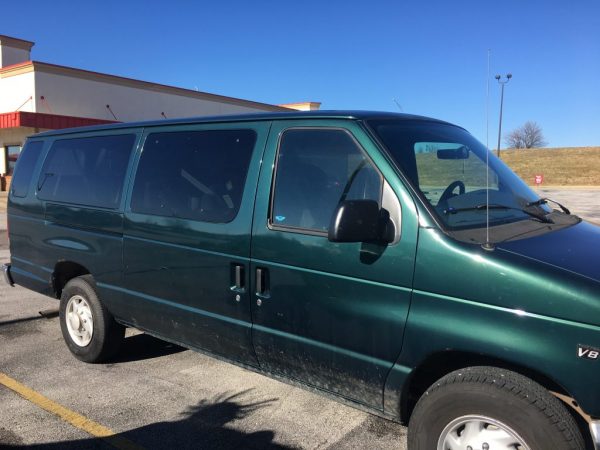 Friday, Blaine saw pretty much his dream van come up for sale on our local Craigslist. We looked at it Saturday at noon… and drove away in two vehicles. Meet Esmeralda, Esme for short. She’s bigger, louder, and greener than Nellie, the big white van. Esme is a fifteen passenger diesel van, with a desperate need for a new muffler but otherwise pretty decent. She’s older than Nellie, but has a sliding door instead of the nonsense that the other van tries to pull with parallel doors that make parking lots a nightmare. Esme gets better fuel economy and gets me cargo space for the first time in ages so I’ll grin and bear the rust and wear she boasts. She chugs like a tank and feels far to loud and obnoxious to be a mere people mover. But groceries… I’m almost looking forward to my next grocery run and not having to put groceries all around the van and the people/feet inside.

Nellie stays, for the record. We haven’t had two vehicles that fit all of us in seven years. I’m pretty excited about that. Blaine’s pickup remains in tough yet driveable shape after my accident this summer but as we look toward the future as that pickup gets OLD, he needs something to drive to work.

In other news, both Elliot and Stellan have been  promoted to the second row. Dukes of Hazzard theme song: slightly quieter. They’re excited. I’m excited. Everybody wins.