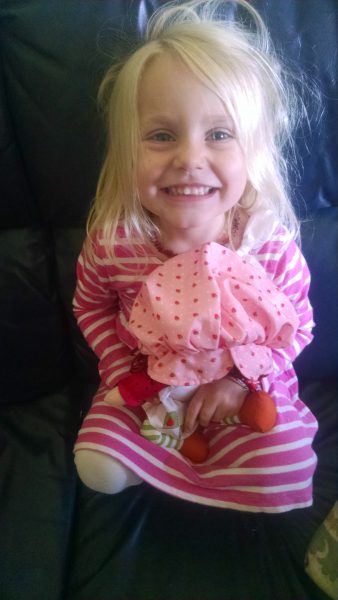 Miss Elliot got a Strawberry Shortcake doll from Grandma and Grandpa for her birthday. She hasn’t let it out of her sight since. She has no idea who Strawberry Shortcake even is – but a doll that is covered in strawberries and smells like one? Oh my, yes. She’s in love.

Blaine left Monday for Presbytery – meetings for our church synod. That left me, for two days, with eight kids including and one very cranky teething baby. Lord, help me. It was one thing after another, including a lovely spring storm complete with tornado threats and one cat-locked-in-the-van episode that left me with a mountain of laundry and the need to mop the van floor. Lucy’s fine. She might have crossed off one of her lives, however . My van still stinks.

Our church has been without a pastor for quite a few months now. Sunday, for the first time, we were without pulpit supply and Blaine had to preach. I always said I’d be visiting family elsewhere if that ever had to happen. I didn’t follow through, but it has been a rough week. Single parenting, while not since he’s actually still here, stinks. I’d never survive long term. The service went well though, and he got few comments. I guess no news is good news?!

Stellan is walking a bit more, but good luck convincing him he can do it on his own. He’s “chased” me across the room, making it the entire distance, but he won’t volunteer to do it on his own. Soon. For now, I tell him to walk to me and he shakes his head at me. It’s cute… for now. He has started knocking on me when he wants what I have… and it goes to a full on open handed pat/slap if I don’t respond the way he wants quickly enough to suit him. And yet, he doesn’t fuss or shriek so I’ll take it. He has abandoned all sign language and attempts to talk instead. It’s cute… incomprehensible, but cute. He still hasn’t started calling me Momma. He says hi, bye, Dada, amen – that’s about it. Silly boy. I finally took him to the doctor today after intermittent I-assumed-teething fevers, to find out he has a double ear infection. Poor boy.

So… Blaine’s finally home, today was a mess of dentist and doctor appointments, along with awana and a few shopping stops. I’m done. Stellan’s virus has me quarantined tomorrow, and I’m rather thankful. I got this brilliant idea to consign a bunch of clothes that Elliot and Stellan have outgrown. (I know! Some of these things Liberty wore! My babies!) That means sorting and washing and ironing and tagging and putting things on hangers. I’m hoping it’s worthwhile! The purging feels good, anyhow.