Yesterday, entirely by accident, I found a pacifier that Stellan will take – and actually keep in.

For four months, this boy has screamed more often than not. He’s the fussiest thing I’ve ever met. I’ve tried pacifier and pacifier, and he’d finally resorted to his fingers. He’d never ever kept a pacifier in his mouth, chewing on it and losing it instead. I’ve bought new ones regularly in an attempt to find one he’d take. Just this week I bought one that bragged to stretch like a you-know-what, completely creeping Liberty out that they’d mention such a thing. Hey, I’m desperate. If stretchy is what it takes, I’m all for that. Nope. No go. He chewed on it and spit it out. The boy mocks my attempts. 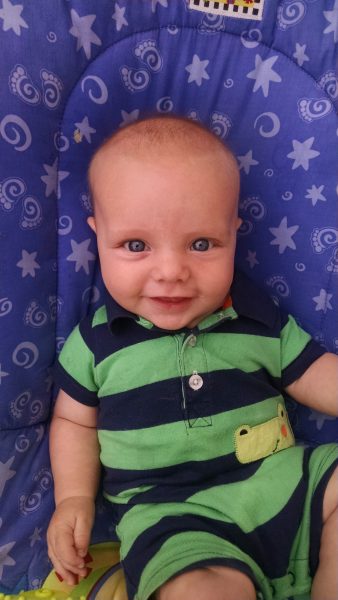 Yesterday I was looking for something in Elliot’s dresser and found an old Mam brand binky, I think in 6-12 month size, that she’d never used. I gave it to Stellan, to cross yet another brand off the growing list of pacifiers that he hates, to  add to the massive graveyard of ridiculously expensive pacifiers I’d tried in an attempt at keeping my sanity.

He took it! All the brand new binkies he despised, but the stale, significantly-older-than-he-is, slightly girly, dusty old binky that’s sat in a dresser for a year and a half… that’s the one he wants. And, in a moment of you’ve-got-to-be-kidding-me, I realized that I’ve been handing 0-6 month binkies to my four month old son who is the size of most of my one year olds. He’s wearing 6-9 and 12 month clothes. Call me sleep deprived and reduced to a ridiculous amount of excitement over a properly sucked binky, but what a revelation.

He hasn’t sucked his fingers since. He actually grabbed it when it was laying next to him and he popped it in himself.

And I walked away with shreds of sanity barely there, armed with a fistful of bills to invest in Mam brand binkies. Big ones.

In other news, Elliot’s cool. Very cool. She falls asleep with her (brother’s) glasses on. Upside-down.

Oh, and she weans from the pacifier with a new one left unused, to have it thrown in a drawer and save my sanity years later.