Dogs are not my favorite. I know, that’s so wrong, but… I tolerate them. Rather, we tolerate each other. They carry fleas and lick and jump up on me when they are muddy. I just… tolerate. We have two dogs now, Brady and Maisie. Brady is a tiny 8½ pound 5 year old yorkie/poodle. Maisie is a 5 month old puppy… a mutt mix of border collie, boxer, and lab. Maisie chews – on everything. Most recently, she ate a phlox plant and tried to eat a metal bell. She’s consumed two cucumber plants. Life jackets were last week. Shoes are never safe, even kicked off during supper at the picnic table. They disappear.

Brady has better manners. She doesn’t jump. She comes when called. She doesn’t have a tongue big enough to notice whether she licks or not. She’s never eaten any plant. But. Brady barks. Maisie, thankfully, rarely does. But Brady cannot get it through her tiny little head that she should hush. Scold and she’ll be quiet for a minute or three, but, in Blaine’s words, she’ll bark every time a deer farts in the woods.

Lately, I sleep poorly. I make many trips to the bathroom. I don’t need anything else making this worse. Brady spent one recent night alerting us to said deer’s infractions, and I had had enough. I lay there dreaming up solution possibilities, and fell asleep and dreamed of an elaborate rubber band muzzle. On something so small, it might actually work, but I opted for a kennel on the porch the next night. She’s wisely remained mostly silent since the one night she found herself grounded in lock up. I won.

Funny thing is, the next morning Maisie was the one who looked like she was broken. Apparently the puppy who eats my flowers and vegetables without second thought, licks the baby’s face with a muddy tongue, and sneaks food from the baby when I’m not looking can’t handle laying next to a sad little dog locked in a kennel for a night. Maisie always sleeps on the bench on the porch. That night, she slept on concrete next to the kennel. 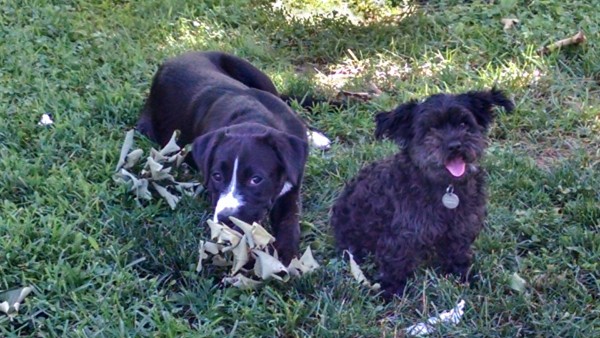 I’ve yet to ever chase a child while they ran from me. They would never. But each dog has had me, on more than one occasion, running after them, blood pressure rising, as I chase them onto neighbor’s property to retrieve them and enforce my command for them to come to me.

Yeah, we tolerate each other. And apparently, I dream of ways of getting even with a dog that weighs less than most of my newborns. Do tell: dogs. Love them, or something else?!