Eden Rayne turned ten years old today. Her baby sister Elliot Adelaide turned eleven months today. It was quite the day. Their dear daddy, hardworking man that he is, headed to Florida this morning to do a boat photo shoot this week. I offered to hide out in the back of the van and tag along because, um, Florida, but he just laughed at me. I don’t think he thought I was serious. 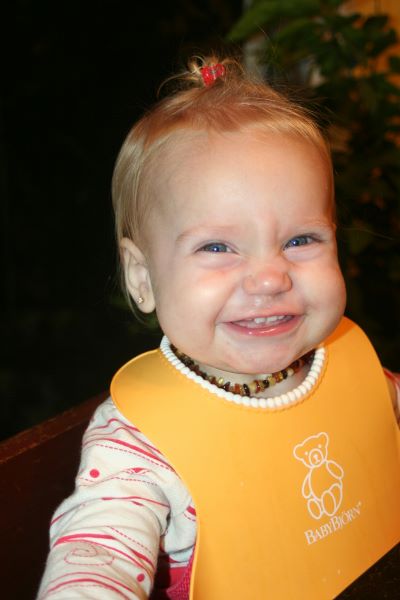 I had a moment that I had to take a deep breath, look at the seven little people before me, and remind myself I can do this. We made it to church on time, everyone brushed their teeth, had their hair done, and was dressed. We even had all shoes on the right feet. Ellie cooperated and slept during the church service and, except for that moment when her digestive system decided the adult Sunday school class was a great moment to let things fly and stink up the room, it was a rather uneventful day. Eden asked to make her own birthday cake, so I sighed at the disappointment of not having to slave over her requested German Chocolate Cake and handed it off. Despite each of us finding a few clumps of baking soda that failed to properly mix, it was a great first try. 100% from scratch, it took her about an hour to get it put together. She did well. 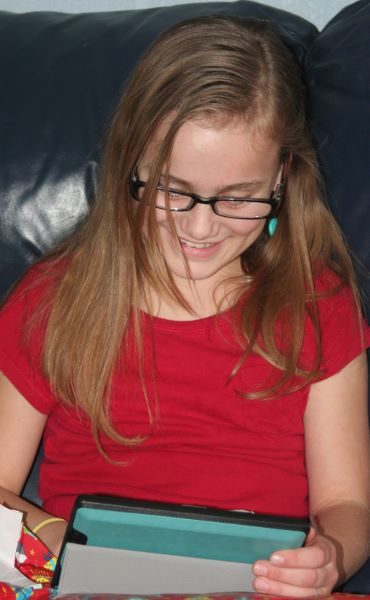 Eden had requested a new flexi clip for her birthday. I had fun picking one out. Then… her kindle e-reader broke. Just like that, my birthday ideas for her changed. In the interest of keeping my dear book-loving daughter well supplied with free books that do not require me to visit the library three times a week, I need her to have a kindle. She got a new one and is quite thrilled. Or so I’m assuming, judging from the thirty eight ‘thank yous’ I’ve heard since she opened it.

Eden loves books and playing with hair, jewelry, singing, and running. She’s my chatterbox, a willing worker, and, when she can keep her head in the game, quite good at cooking and baking. The clouds beckon her ever-dreaming mind and have led to more than one interesting fiasco in the kitchen… and in the laundry room. Oh my. 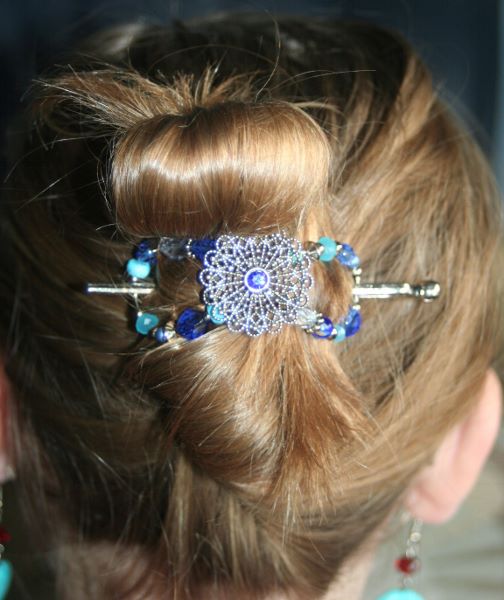 We went out for pizza last night. We don’t go out to restaurants as a family very often. Or ever. It was pretty fun. We found a pizza place that bragged New York style pizza and they did a pretty fabulous job – even my New Jersey born husband thought so. The kids said they’d never had anything so good. We were pretty pleased with their restaurant behavior – they don’t get to practice it often. There was a hilarious moment when Ruby pulled a famous Ruby belch that, despite my frowns, she continues to be “unable to control” and apparently she found out the hard way that the pizza tasted fabulous the first time but less than fabulous the second time and we all thought, from the look on her face, that we’d be seeing it a second time too. It makes me laugh just thinking about that look. Maybe she’ll learn. Maybe.

I gave Elliot a pickle the other day. I just can’t help myself. She’s a fabulous sport. 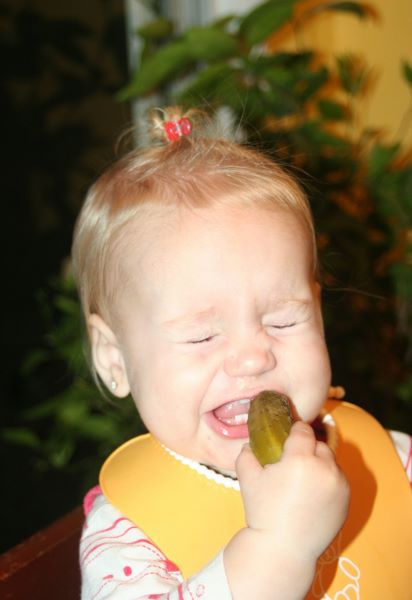 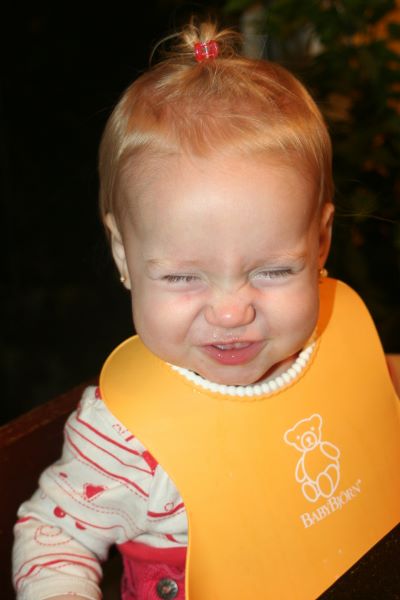 Ellie’s about 25 pounds, not yet crawling, sitting well but not quite mastering getting herself sitting up from laying down, and loves standing up and holding onto furniture to explore things a bit higher up. She slides herself along on her belly quite nicely on our hardwood floors, but in other places we’ve gone that had carpet, she was quickly frustrated. She eats everything but bananas are her favorite, nurses day and night, gets giddy when she sees my sling, and says ‘Dada’ and ‘hi’. She says ‘Momma’ only when she’s mad and jabbers and growls nearly nonstop. She signs ‘more’ and ‘all done’ and waves and claps. Despite one really rough start to life in which she very nearly did not make it, she’s thriving and growing and shows no ill effects.  God has been so merciful.

That’s our weekend in a nutshell. Pray for me this week, as I work this parenting gig on my own. Everyone, myself included, seems to be starting colds to top it all off. It could be a long week.