When I got up this morning, Liberty and Eden were up already. Liberty was working on math, and Eden had finished her math and was putting baked oatmeal together for breakfast. Perfect. It was almost finished baking when I got into the shower.

Twenty minutes later, I was finished in the shower, all the kids were up, and breakfast was… still baking. Why?

It wasn’t done yet. Confused as to why it was taking so much longer, I went to check on it. 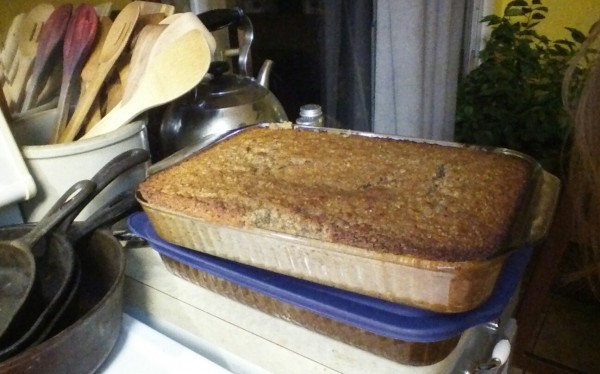 The pans were nearly overflowing. What happened?!

Turns out, Liberty had taken a new recipe card and copied down the recipe we always make and had written the amounts in double. It was clearly marked that it was doubled, that it needed to go into two baking pans. Eden, in all her daydreaming glory, took that recipe this morning and doubled the recipe. Again.

Sixteen eggs. A POUND of butter. Half a gallon of milk. Twelve. Cups. Of. Oatmeal. In other words… a large portion of my grocery supply… for breakfast.

The top was burning. The inside was raw. The batter was starting to pour down the outside of the pan. When I finally just took it out and called it as good as it was going to get, it fell.

I didn’t offer grace.  I stared at the mess that was my kitchen, the pans over filled and threatening to spill over to the bottom of my oven, and I had a temper tantrum the likes of which could put my three year old to shame.

I had plans for my morning. Cleaning up a disaster wasn’t it. We’re on the last dozen eggs. I didn’t have time to go to the store today. Butter costs a small fortune lately.

I. Don’t. Want. To. Do. This. Not today. Not just before co-op. Not when my fun fabric I’d ordered two months ago and waited for it to be back in stock for two months was delivered last night and was there, mocking me to make a baby wrap in time to wear it at co-op.

What’s important? Walking all over my daughter’s emotions, knowing she was trying to help? Getting angry and pitching a fit to show my tantrum-loving son how it’s done? “Don’t do as I do, only as I say?”

I’d love to say I took the high road, that I extended grace and we laughed at the stress of the moment, but I didn’t – not until later. But I find myself convicted. Convicted to make my response what I want theirs to be when I mess up. When I undercooked the potatoes, they didn’t complain. When I didn’t cook enough for seconds and everyone wanted more, we made pudding. When they have to wait for me to finish a subject with one child before helping them with theirs. If I need someone to change a diaper, help a baby, or start a load of laundry, I need grace from them.

It’s hard to remember, sometimes, that with the the craziness that is my life, grace must abound all the more.

Even when it means eating baked oatmeal for a week.