Last Tuesday, the dog disappeared. She was here when we got home from co-op at 5pm but didn’t come when I called her to come inside just after midnight. The next morning, she was nowhere to be found. We called and called, but… nothing. She’s never done that before. She runs outside much of the day, but she stays close by, and even, as she’s gotten a bit older, stays off the road. We didn’t know where to look for her. On the way to town to a planned playdate, we saw a shredded tire in the ditch. Liberty and I gasped in unison, then both realized we weren’t looking at Brady.

When we got home Wednesday afternoon, I called every humane society and the local police station to see what might have happened to her. They told me that where we live, in the country, there’s no pickup of strays. One facebook page was recommended to find her, and moments after I posted a photo, someone commented and told me she’d been picked up.

Eden gave Brady a bath and haircut days before. She’d forgotten to put her collar back on – and someone had picked her up from what sounds like our front yard. After a few stressful moments where the lady that had her told me there was no way this was our dog… followed by a funny moment where Brady was giddy upon hearing her own name… the lady brought her home. Six kids came tearing out of the house from two different doors on two sides of the house, running down the hill to the lady’s car. The sight was priceless. Brady was thrilled to be home – and when we searched but failed to find her collar, I promptly made her a new one and ordered tags. (And took photos of her. I searched and searched for a photo to post on Facebook of her and finally cropped one of her at the kids’ feet. She’s a chronic photo bomber… but rarely the only one in the shot!)

All that to say this: my attitude rubs off on my children. 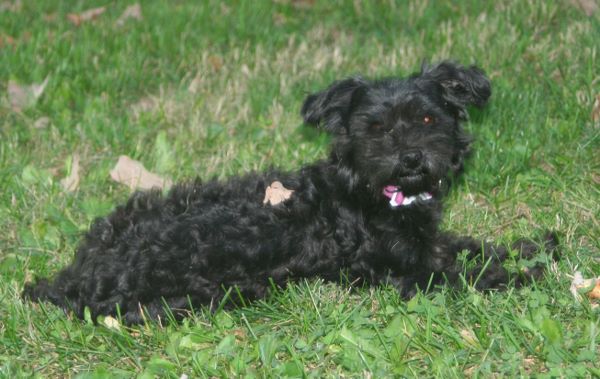 When I found out where the people had found Brady, and rather than letting her be, took her with them, I was rather skeptical. It had to have been in our front yard or within 1/8 of a mile of it along a country road. No, she didn’t have her collar, but she was clean and groomed as well as a nine year old can groom, and I couldn’t believe they would just take her – and the accusations of her being filthy and matted and ‘on the road for weeks’ were enough to make me a wee bit crabby about it.

The following days, Brady feasted on the love and attention of six children (Ellie could care less and do without the licks) while they processed all of it. Dear Charlotte, her all her seriousness, kept talking about the people that stole Brady. She talked of the neighbors that stole Elmer and the people in the black car that stole Brady. And I felt guilty.

I don’t know what happened. I jumped to conclusions because it was annoying, worrisome, and not something I wanted to explain to my kids. We spent time driving up and down our road trying to see her… or her body… and it was awful. But my skepticism rubbed off on my kids and their faith in people and possessions. It was a stark reminder that they are listening, learning, and forming their opinions based on mine.

Good things to remember when I speak: they aren’t weighing all the options. They aren’t making an educated guess based on all the facts. They are hearing me and trusting me to speak truth, bias or no.