Words I never anticipated putting into a sentence prior to motherhood:

“Don’t itch your head with the saw.”

Really now? The red stripe of paint down the side of Sterling’s face, just where he was itching, made it look like blood. I thought, before investigating, that he’d actually cut himself in the process. Good. Grief.

Charlotte’s taken to putting Ellie to sleep and can do it like no one can. Lay crying baby down in her bed, and Charlie will rub her head until she’s asleep in three minutes flat. Charlie’s proud. Ellie’s sleeping. It’s a beautiful thing.

Introduced Ellie to food these last few weeks. At six months old, she’s desperate to try it. Turns out graham crackers buy me some time to accomplish a small chore, she loves squashed peas, but sand is her favorite. Go figure.

Ellie also cut her first tooth. She’s a one-toothed wonder and biting to prove it. 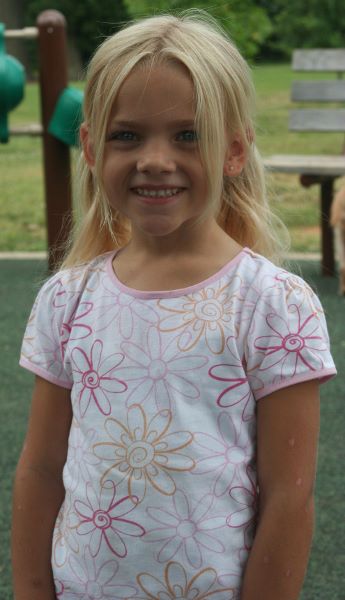 Ruby turned six on Wednesday. She chose the zoo for the day’s activity. I decided to try it without a stroller. Ellie went in my wrap, and everyone else walked. Hello, exhaustion, all around. It was worth it though, to not have to push anything and be able to go anywhere we wanted. We each carried a water bottle though, and Pierce was constantly complaining his was too heavy. It was the only time we missed the stroller, really. Seven water bottles is a lot to keep track of.

Co-op started this week. No tears. Last year, Pierce held his breath and screamed and cried and fussed and was a general pain for nearly the whole year. I thought this year would be better. He marched off to his class, happy as can be. Amazing.

Ellie is in my co-op class. I found out she’ll cry for strangers. I didn’t know she was at that phase already. I’m in the nursery this year, and at one point, we had five babies hollering. I’ve decided the nursery was a horrible idea. I love my babies – but what to do with someone else’s baby that just wants momma and I’m not it? I babysat more days than not for years and years in high school, was a live-in nanny when I was out of high school… generally, just loved kids. Now that I have my own, the draw to other’s kids is just not there. It’s going to be a long, long year.

Ruby had Andes Thin Mint Ice Cream Pie for her birthday. It’s become a favorite around here. I made two pies, we ate one whole pie on her birthday, and I told the kids they could each have a piece of the second pie after they finished school today. They all had pie before lunch. And then I sent them outside to run off the sugar.

Sterling and Ruby are working together in 2nd grade English this year. They had to memorize and write down I Corinthians 14:40 today. “Let all things be done decently and in order.” Ruby wrote it from memory, as instructed.

“Let all things be deesentlee and in wtr.”

I was impressed on how she handled ‘decently’. ‘Order’, I have no idea. It’s vowel-less and… just wrong. But she did it herself. She’s making leaps and bounds of progress on reading. We might actually get there yet. She’s aced two spelling tests in a row now.

I got new glasses. Charlotte took 2 seconds to notice when I got them in the mail. Pierce took about 4 seconds. Liberty, Eden, and Sterling all commented within a minute or two. Blaine… took a good hour and a half. Comical. Some days, it’s just about survival, my friends.