Early yesterday morning, before anyone had emerged from bedrooms, there was a crash. 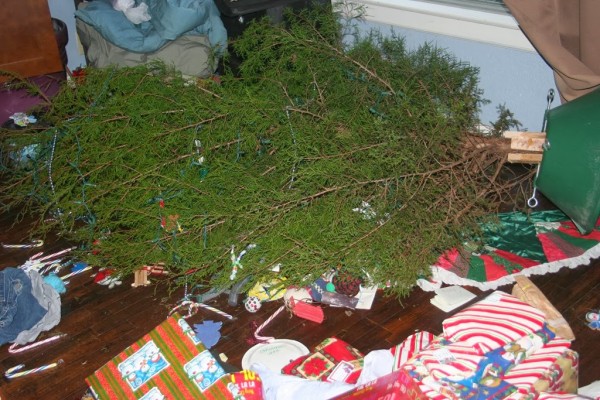 The tree that had been standing tall for over a week fell over. No one was in the room, it had never threatened tipping before, but there we were, drenched gifts and broken ornaments strewn across the living room.

I headed for the kitchen to make Blaine’s gift. Without a clue what else to get for him, I decided to try my hand at the very Dutch pastry banket, or butter letter. Not being a stitch Dutch myself, I had yet to try making it, but my completely-Dutch husband grew up with it, loves it, and has hinted many times that I ought to make him some. After a thorough search of my city’s grocery stores, I found one that carries almond paste, and we were in business.

The filling melted out of the dough EVERYWHERE. Every single one I made leaked. My dear husband assures me this is relatively normal, but after the tree, an imperfect gift for my husband was not what I’d hoped for. Frustrating. From his consumption of his gift, I’m thinking Blaine’s less than bothered.

While the butter letter baked, I had one of my girls mix up the pumpkin pie. The oven sat hot and empty for over an hour before I found the pumpkin pie batter in the mixing bowl, pie crusts sitting empty, oven sitting empty. There went my target time for dinner. We didn’t eat anything beyond fruit for the first time yesterday until 1:15 pm. It wasn’t the meal I’d planned. Our big meal was supposed to be a late lunch. It was supper. We didn’t open gifts until 3:00.

We ended up eating three hours after I’d planned. Charlotte dropped and broke her brand new ornament. Several of the dolls made by dear friends for my girls took a bath in Christmas tree water. Pierce peed on his new truck. Ruby decided to take the paints out of her new paint by number and Pierce opened the lavender and painted the floor, Ruby’s new skirt, the couch, and the paint by number package. I found out said paint washes off of wood floors and leather couches and skirts well when wet. Charlotte’s new sock has a small seam in a place where a seam ought not be from the scissors she used to open the package. The Christmas tree was down and out of the house before supper when it threatened to fall again after we cleaned it all up and straightened it once. The kids loved their Lincoln Logs, played heartily, picked them up and filled an entire five gallon bucket with them before bed, and Pierce helped them out by dumping them with a crash during devotions.

Sitting back last night, exhausted by the day and reminiscing on years past, I couldn’t help but think. Things were not like this growing up for me. It was just my sister and I, life was organized and quiet. Traditions were upheld. Yelling over the noise never happened. I remember exactly zero toppled Christmas trees. We took the tree down when we wanted to, not when it forced us to. We always opened gifts in the morning. The living room didn’t look like a hurricane had hit after gifts were opened.

Was that better? What am I complaining about? It was less stressful, to be sure. Things were more organized. There wasn’t chaos. It was quiet.

Jesus was born in a barn, my friends. He left a perfect world to become man, to dwell among us, to save us from our sins. He humbled himself from God to baby. A not-talking, not-walking, helpless infant laid in a hard, stinky, dirty manger, a baby sent to save. And I’m complaining that there’s chaos in my house, that things aren’t happening when I wanted them to, how I wanted them – on a day that we celebrate Him.