My three oldest kids went with friends for the evening. Charlotte and Ruby crashed on the 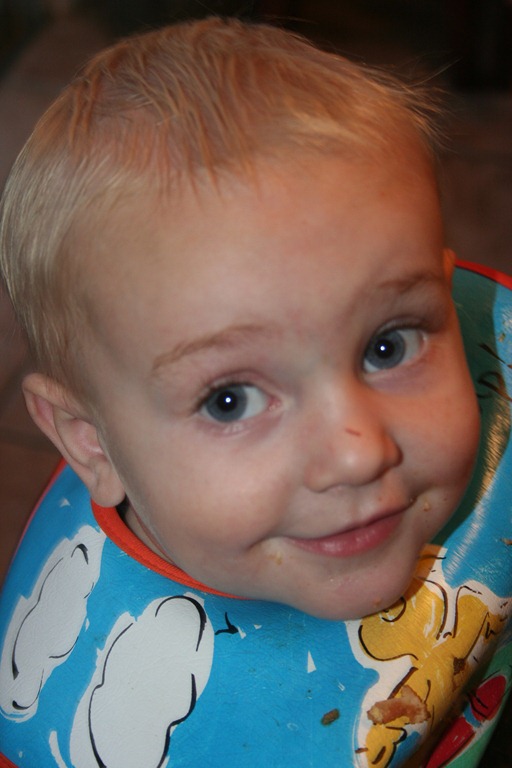 couch at 6pm and haven’t moved since. Blaine’s at a meeting. Pierce and I got to just hang out, just the two of us, for hours. That was amazing. Turns out, he’s really, really funny and super affectionate with 100% attention from Momma. Unfortunately, 100% of Momma is a near impossibility 99% of the time. But it was fun while it lasted.

I made this for supper tonight. Oh, so good. So good. Pair it up with this and you’ll be so impressed with your cooking abilities you’ll never want to eat out again. On the second recipe, cut back on the salt by a half teaspoon or so. It’s a bit much. On the first recipe – I’d double the recipe to feed eight, try skipping the bacon for frugality’s sake because I don’t think it would be missed, double the kale and add an extra quart of stock if I had to do it again. Which I will, because it was amazing.

I got caught in a rainstorm coming out of the grocery store tonight. Charlie was sleeping, tied in my mei tai on my back. I pulled the hood up on the sling to cover her head and we made a mad dash for the van. I got the kids in, groceries in, and climbed in the back to take Charlie off my back and that’s when she woke up. Her only waking comment: “Why are my legs wet?!” Baby Girl, you missed all the excitement. She whined the whole way home about wet pants that she hadn’t peed in. Bonus: my jeans were drenched. My shoes, sopping. My hair hang in clumps around my face. But my back was dry!

And… there’s the van pulling into the drive. Everyone’s home. Realization of the night: the clocks tick. Two of them, opposite each other. I didn’t know. What a fun thing to find out, for no other reason than it was quiet enough to hear. Amazing.