After wanting to paint this vanity for two years, I’ve finally done it.
Oil paint and pregnancy don’t mix, and since I’ve been pregnant for all but 9 months of the two years since we bought this house… and apparently those nine months were not enough time to get this accomplished… you know.

But I did it! Picture it with brown stain, chipped wood, mismatched side cabinet. Ugly. 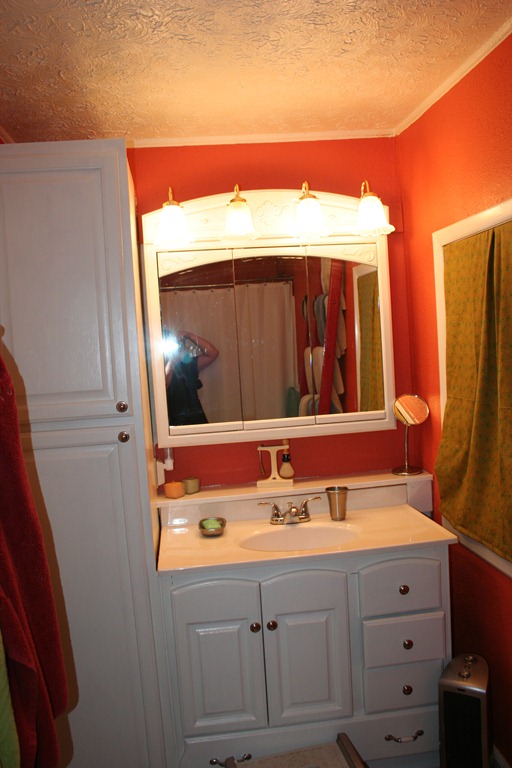 I started Wednesday. I touched up the orange walls, made a new window curtain that pulls up into a blind, repainted the trim, and sanded down and put one coat of primer and three coats of paint on the vanity and cabinet.

I’ve had paint in my hair for days. Throw in there a shower (ok more than one shower, but one particularly desperate one) with hair scrubbing desperation when I couldn’t find my driver’s license and thought they’d take another photo to get a new one. I got the paint out. They didn’t take another photo. Imagine that.
I digress.

When I’m finished completely, the red ladder will have red and brown towels to match the red and brown in the window curtain. Preferably the turquoise one will not be present either. One could hope. Blaine had a lovely idea and I’ll put a strip of fabric matching the curtains on the shower curtain to pull it all together.
I’m having fun. A panoramic photo of dandelions or kids or some such thing above the toilet… toilet barely pictured, but I assure you it’s clean and present… and I’ll really be done.

Just for the record, I’ve never, ever lost my driver’s license before. It has me baffled. Now that I have a new one, I’m waiting for the old one to turn up. So far, it hasn’t. Baffling. When the DMV lady asked if I still weighed ***. I said, “Um, no, but I just had a baby. It’ll go back to that. Just leave it.” She looked at Pierce, weighing over twenty pounds, wearing 18 month clothes and looking very much not like a newborn, and nodded, smiled, and left my weight what it was three and a half years ago. Yes, thank you. Wise woman.

I should have told her that I was down to 97 pounds. I always wonder how they would react to such ridiculousness.

And now, since the clock that I just photographed tells me it’s ten twenty-six, I’m going to bed.