Yesterday I thought Ruby fell asleep in the shopping cart. A good 20 minutes into her full-face plant into the handle, one of the kids ran up to her yelling. I scolded them for trying to wake her up and was informed she WASN’T sleeping. She’d been chewing on the handle the whole time. Ewwww.

“Mom, are these oranges or tactarines?” Sounded like something dangerous…

Sterling’s wearing his undies to bed without accidents! Now that I type that, I’ll be washing sheets – but he’s been dry all week! 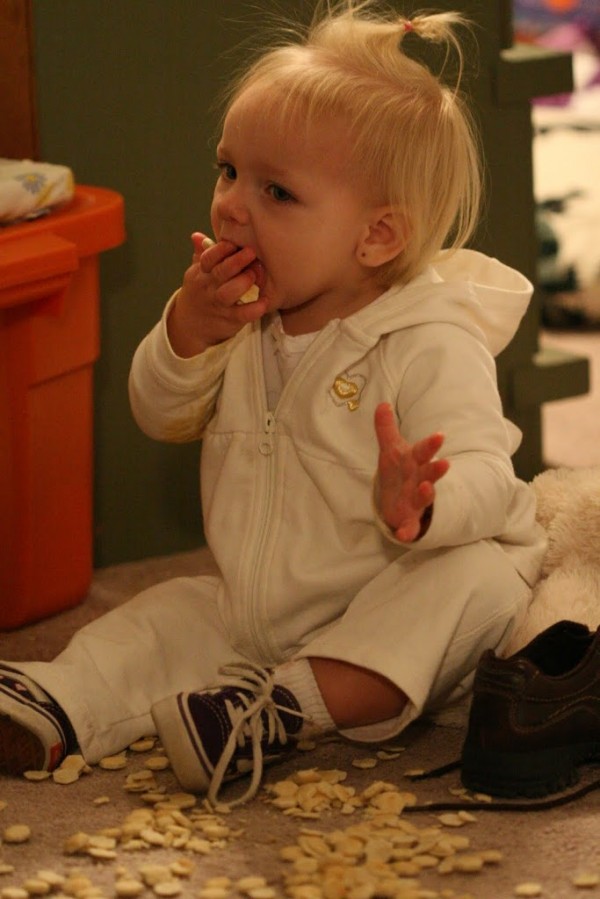 Blaine’s in CA. He left Tuesday, driving the box truck full of photo shoot stuff. He called yesterday afternoon, having arrived and needing to rub in his surroundings. It’s not even funny. A pool, two hot tubs, two full time gardeners… it’s a rough life. Meanwhile, it was 3 degrees when I got up this morning. All five of us are in layers and more layers, and I gave in and turned the heat up to 69. Brrr. Poor B had to put a long sleeve shirt on over his t-shirt when the sun set, because it cooled off. Poor thing. I’m starting to rethink this whole “Sure, go to CA!” idea that I agreed to. Asking that in the mild November temps didn’t sound nearly so bad as the frigid temps we’re currently experiencing.

Whining over. Just had to get that out of my system.

Where do I find a boy’s scarf? Or at least not a pink and purple one? Sterling wants one desperately, but all I can find are pretty feminine. I’m running out of ideas – but I’m not so desperate that I want to learn to crochet/knit/whatever skill I don’t know how to do that involves making a scarf. Maybe I’ll sew him one. Hmmm.

Puking seems to be done in my house. Ruby is happy when awake but sleeping lots – but with the impressive number of teeth currently making their way into Ruby’s mouth, it’s no wonder. Sterling escaped it all together, lucky guy.

Someone in Aldi yesterday commented on my children – particularly the number, ages, and lack of gender balance. She said Sterling was “a lucky boy” in a voice that said she didn’t think he was so very lucky at all. I told her that his wife would be one blessed woman, and she looked at me with a puzzled look, then dawning, then complete agreement. I mean come on, wouldn’t you have loved to marry a man who grew up with three sisters? One who understood what he was in for? Then again, my husband has five sisters, and I’m not sure if he knows what hit him yet. Maybe my theory’s bunk.