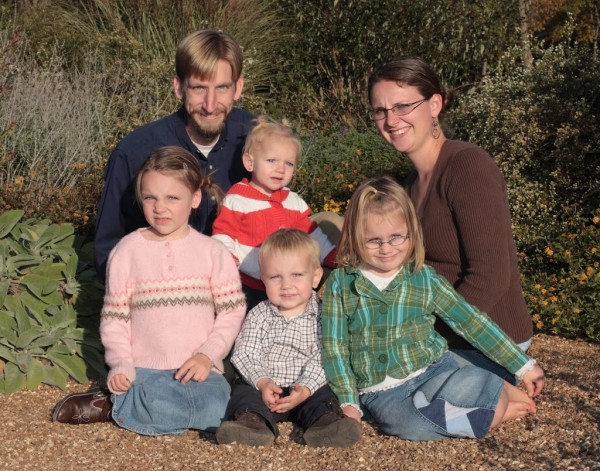 If you want to get technical, this is a year late. I didn’t get a letter sent out last year at all. But if you’re getting this before Christmas 2009, I’m going to consider it on time anyhow. Some things can’t be caught up on. J

This year was… busy. Then again, so was last year. Ruby was born September 3rd, 2008 and she’s added plenty of fire to our everyday blah’s. Ruby’s fifteen months old now and walking, trying to talk, and giving me a run for my money when it comes to training her to sleep through the night. She’s the baby around here and she knows it! Ruby is the first kid around here to throw herself on the floor in an all-out temper tantrum and discipline seems to only make her mad. We keep at it though!

turned two in May. He, despite being the sweetest boy I’ve ever met, has decided to be two anyhow. Let me tell you, has figured out how to be two. Maybe it’s the three sisters thing, but when he gets tired, reasoning goes out the window and sleep is the only thing that can fix the problem. He loves books and anything with wheels. “Read that me?” is the question I hear most from . Well, that and “Hungry boy, Momma!” Now if I could just get him to be enthusiastic about more than hot dogs, peanut butter, and anything containing sugar.

is four, will be five in February, and has been doing Kindergarten this year. I’m homeschooling, and was either going to be “in” school too or I was going to go crazy trying to keep her occupied while did her work. Her memory amazes me; she’s getting better at reading every day and is starting to show signs of someday being coordinated enough to draw letters smaller than 2” high. Someday. She learned to ride her bike without training wheels this spring and is itching to get outside during all her waking hours. The colder weather we’ve had lately is putting a damper on ’s style.

is almost six and a half. She’s a huge help around the house and excelling at her first grade schoolwork. “Felicity” is still her favorite toy – she takes better care of that doll than she does of the poor gerbil. She begs to go for “walks” – as in, I walk, and she rides her bike. She’ll ride for miles willingly, but when I made her actually walk last week, well, let’s just say that her stamina was limited. Very limited. remains quite particular about her things – to the point that when I was cleaning her dresser drawers out and removing her summer clothing, I found her shirts arranged neatly in piles according to color! We’ve come to a great place where she takes care of her own clean laundry – and apparently does a better job than I even realized!

We moved to in August. is working for Bass Pro Shops in their photography department and I’m home with the kids, homeschooling and following Ruby around, trying to clean up her messes hopefully as fast as she makes them. We’ve been involved with starting Gospel of Grace Church, an independent Reformed church that is working towards joining the Orthodox Presbyterian Church, hopefully in the spring. We love , loves the warmer weather and I have to admit, I’ll take it too. J

I keep a blog at https://abiglittlefamily.com/ – you’ll get a bit fresher news there than from my sporadic Christmas letters, if news is what you are after. I hope this finds each of you well… and perhaps a bit more caught up than I am!