I’ve never “taught” any of my children to dress themselves. The just did it. Until now. Sterling, at the ripe old age of nearly two and a half, needs to learn this. Clothes, in his opinion, are meant to be worn until they wear off. He loves whatever he has on, most certainly does not want to change, and will protest if you make him. He’s recently figured out how to put his shoes on, so I figured we’d take this a step further. The girls were changing their clothes multiple times a day at two, just for the fun of a cute new outfit. Sterling, not so much.

We started with pants, and he’s worn jeans backwards often these days, but darn it, he did it himself. Socks were today’s new item. He put one on quite successfully, put the second on rather crooked, and asked for help. I started straightening it when I realized he’d put the second sock over the first. Really?! Ah, we haven’t progressed in this whole learning process quite as far as I thought. His underwear are beautifully backwards though – and his shoes happened to land on the right feet today.

I decided three nights ago that it was about time for little Miss Ruby to sleep through the night. I’ve allowed midnight nursings (and 2:00, and 4:00…) to last far too long. I moved Sterling’s bed into Liberty and Eden’s, woke Ruby up before I went to bed for a last feeding, and put her to bed feeling like I might just cry along with her at 2:00 am. She didn’t wake until 4:20, I had to put her back in bed 4 times, but each time she only cried for a few seconds. It was strangely disappointing – Ruby has far more persistence than that! But all was good, and I was the only one laying wide awake, feeling the evidence of missing 4 nursings during the night! 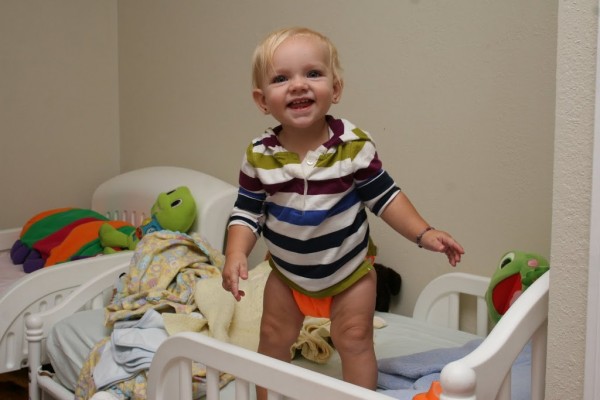 The second night was even better – I had to put her back twice – I think. My brain doesn’t remember that far back. It is pitiful when she comes wandering into my room at some random wee hour, little fists signing “milk” for all they are worth, and I deny her – but she takes it better than I dreamed possible.

Last night, I told her once to go back to sleep. Awesome. I actually slept most of the night without waking up. It’s been, oh, a year and a half since that last happened. Sterling went back into his own bedroom, and nights have been reclaimed for sleep in our house. Beautiful.

Blaine’s working at Bass Pro Shops in the “Creative Services” department. He helps set up products to be photographed. He’s not actually touching a camera these days, painful for him, but at least it’s in the right field – and a paycheck to boot. Yesterday he came home with a big blister on his hand – he’d steamed clothes for hours and apparently decided his finger was also a bit wrinkled. Ouch. He said he’d told his co-workers not to tell me that he can iron. He hasn’t ironed in seven years. I told him neither had I! Not quite, but close. Wrinkles add character, right?