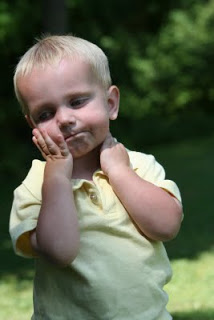 Sterling was due May 30th, 2007. He was the first baby we found out whether he was a boy or girl – on accident. But it was fun to know we’d switch gears up with a boy.

May 25th, 2007, I woke up at 6:30 with early labor pains. It took me many hours to be convinced that’s what it was, but I called a friend to take the girls and we packed for the hospital. First though, the apartment complex we were managing at that time had an appointment scheduled for a lock-out with the constable. Perfect. We had to wait until 11am when he got there to change the locks on an apartment. Blaine hurried.

We stopped for bagels on the hour-long drive to the hospital. My first serious contraction hit while Blaine was in the bagel shop. That’s when I finally was certain what was going on.

We got to the hospital at 1:30 pm. The nurse came in the triage room and asked if we were there to rule out labor. She looked at me like I was nuts when I said that I was pretty sure we were there to deliver. She checked me and only then agreed with me – I was 5-6 with a bulging bag of water. Suddenly the game became trying to get me checked in before my water broke and gushed out a baby. I was still able to breath pretty well through the contractions.

4:00 pm. I thought I was fully dilated. Nope, 9cm. Doctor says that if she breaks my water, we’ll have a baby. I agree. But… that’s not quite what happened. She waited for baby and instead I went backwards to 5-6 cm. She tells me it’s time for pitocin and we’ll have a baby. Oh, why, oh, why do you listen to such things?! But I did.

20 minutes of pitocin, Nubain IV pain relief and I think one contraction’s worth of pushes later, Sterling was born at 4:43 pm. He weighed 9 lbs 2 oz. It all happened so fast there at the end, it’s all a little fuzzy.

Sterling Blaine would have been Felicity Brynne had he been a girl. Liberty named her doll Felicity instead, disappointed in getting a brother. Her disappointment didn’t last long, and she and Eden were thrilled to have a baby to… well, baby. It’s a live doll.