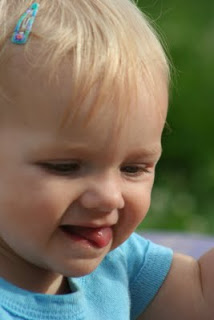 Ruby was due August 27th, 2008. On September 2nd, we went in for an appointment and non-stress test and I asked if she was breech – something just seemed different. An ultrasound later, my fears were confirmed: Ruby was frank breech. Her weight was estimated by ultrasound to be 8lbs 15 oz, an external version was out due to her size, and a c-section was scheduled for the next day.

Side note: it was about then that my sister called in a panic, having just had an ultrasound of her own. She was having twins. It was a doozy of a moment, let me tell you.

If I had to do it again, I’d have waited the full week waiting to see if Ruby would flip on her own. They would have let me go to 42 weeks, I’d have taken every moment of it to see if I could avoid a c-section. But I didn’t.

We got to the hospital at 9:00 am, the c-section scheduled for 11:00 am. We got bumped. Several times. We finally hit the OR around 12:15 pm. The waiting was excruciating, not knowing what to expect.

I got a spinal and was awake for my c-section, Blaine at my side. It wasn’t nearly so horrible as I’d imagined and was over within an hour. Ruby never left my side – she was in the OR with me and I actually held her as they wheeled me back to my room.

Ruby Alexandra was born at 12:43 pm on September 3rd, 2008. She weighed 9 lbs. 1 oz. She was almost Chloe Alexandra instead, but with morphine in my system and a nurse and Blaine both voting for Ruby, Ruby it was. So glad – I cannot imagine her as anything else. Alexandra is after her Aunt Erin. She would have been Reuben James had she been a boy.