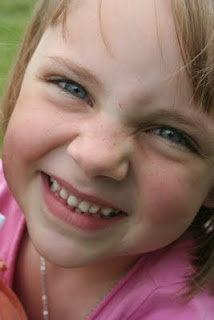 October 2002 – We found out Liberty was coming just a month after Blaine and I were married. Feeling nauseous and awful, I stopped and bought a pregnancy test at the grocery store on the way home from work. When I took it that night, there were instantly the two lines – positive. Blaine, in the middle of painting the kitchen, came into the room, saw the test, denied the second line’s existence for a few minutes, finally admitted it was there, and went back out to the kitchen and kept painting the walls. It took him a little while to process such information. As opposed to me – I went into freak out mode. Not quite what we’d “planned”, the idea took some getting used to.

At 36 weeks and 4 days along, I was in the hospital with contractions. Termed pre-term labor in a hospital that cannot and will not deliver before 37 weeks, I was told I’d be transported to a larger hospital in a nearby town if my labor could not be stopped. They got them stopped.

June 25, 2003 – Back in the hospital with contractions. Labor confirmed.
June 26, 2003 – Still in the hospital. Barely dilated. Certain I was in pain. (Later found out what pain really was.) I was given the option to go home or have my water broken. So tired of pregnancy and clueless, I opted to have the doctor break my water.

My water was broken mid-morning, contractions slowly got stronger, and mid-afternoon a doula volunteered to help me in my attempt at an epidural-free delivery. I gratefully accepted. By 10pm, I was sure death was imminent. Hoping so. Told to push to the count of ten. After a few pushes, they quit counting and told me when I had to take a breath for baby’s sake. Finally left up to me to end this agony, I was not dragging this out if I could help it.

10:12pm, June 26, 2003, Liberty Skye was born. 7 lbs. 7 oz. She would have been Aiden Blaine had she been a boy. Looking back, Aiden Blaine sounds an awful lot like Adrienne and Blaine… not a wise choice, I’m thinking.

So glad God had very different plans for us than Blaine and I had.