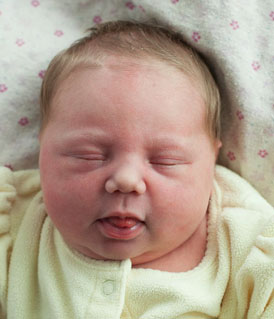 Elliot Adelaide was due March 13, 2014. The end of my pregnancy was hard, baby was getting big, and I was in far more pain than my previous pregnancies.

With the size of baby obviously ever increasing, a plan for a homebirth with a midwife, and Pierce’s birth an ever-present memory of fast labor and accidental unassisted delivery, we made a plan to attempt induction of labor with castor oil and red raspberry leaf tea for March 1, at 38 weeks, 2 days gestation.

I started at 6am, drinking castor oil. Nasty, nasty stuff. In case you were wondering. I took a second dose at noon. My midwife arrived mid-morning, checked dilation, and left again until after lunch. I was 4cm. Heartbeat was 128, strong and steady.

By 1:30 pm, I was contracting, 5 cm, and baby’s heartbeat was skipping an occasional beat. Thinking perhaps it was electrolytes from the less than pleasant effects of castor oil, I drank Gatorade, ate a blueberry/banana/yogurt smoothie, and baby’s heartbeat leveled out. Relief. My midwife broke my water, and I climbed into the birth tub to labor and have a baby.

An hour later, heartbeat monitoring picked up more missed heartbeats. Fear. Something was wrong with my baby’s heart. Options were discussed, and the decision to labor at home, prepared for immediate transport upon birth, if need be, was made. Labor continued. 5:30 pm, more monitoring showed the missed beats were getting far more frequent, missing every other beat, then leveling out, only to begin skipping again.

We were going to the hospital. I headed to get dressed, but first asked to be checked for dilation. Change of plans. My midwife was certain, given my fast labor history, baby would be born on the way if we left then. Back to planning to leave as soon as baby was born. Within half an hour, I was ready to have a baby, mostly due to my amazing midwife and some highly effective, highly painful maneuvers. Baby’s heartbeat was still missing beats, but significantly less.

Baby’s big. Her head was out, her shoulders stuck, and she spun from face down to face up in those moments. Strange, strange, strange to feel baby’s legs spinning her around with violent kicks. Just wow. Again, my midwife was amazing. Within a minute, she had baby out and began resuscitating. It took Elliot four minutes to breathe on her own, and my midwife spent those minutes breathing for her. Scary, scary moments. Once the midwife got Elliot breathing, she checked her heart, and it was perfect. Perfect. The double knot in her cord, one on top of the other, not so perfect. The placenta, falling apart from blood being unable to complete its journey to baby because of the knot, not so perfect. God’s protection, that we induced when we did, resulting in a healthy baby girl that would likely have been stillborn had her size not led to induction: perfect. We’re so, so thankful.

Liberty stayed home to be present for Elliot’s birth, and while it wasn’t the beautiful, calm, waterbirth I’d anticipated her being witness to, she was thrilled to be there and got to cut Ellie’s cord afterwards. It was pretty amazing to have our oldest watch her sister be born, and while Blaine’s fearful we’ll never get grand kids from Liberty after all that… Liberty declares it hasn’t deterred her.

Elliot weighed 9 pounds, 8 ounces and was 20.75 inches long. She was born at home at 6:01 pm on March 1, 2014 after about four and a half hours of labor. (If you were one of the people who received a phone call and I said 5.5 hours, forgive my math. It was a long, scary afternoon… one that apparently left me unable to count hours accurately.)

Elliot was supposed to be Norah Adelaide for a girl or Elliot Adams for a boy. After her birth, Norah, meaning “light” didn’t seem nearly as appropriate as Elliot’s meaning, “my God is the Lord”, so we chose to use Elliot Adelaide. Her mere presence, alive and well, boasts of her Creator and His protection over her life.