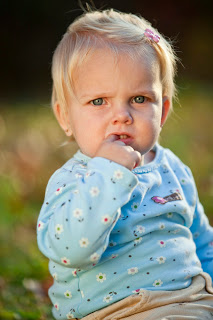 I was due September 24th, 2010 with Charlotte. September 26th we were in the van, driving down the driveway to head to church when we hit the now-infamous bump in the driveway and my water broke.

We took the kids to church and left them there with friends and headed to the hospital. We got there at noon, I was admitted and so labor began…

By 2pm, I was in hard labor – and 4-5 cm. At 3:45 I was in harder labor – and 4-5 cm. Sounded like a good time to give up the idea of natural labor and ask for an epidural. I got Demerol while waiting for the anesthesiologist and minutes later, they came in and were just getting the epidural tube in my back when Charlotte decided that was a good time to make her arrival. And with that, Charlotte came. The doctor walked into the room in time to catch the second half of Charlie. She had blood in her eyes from her quick, (traumatic for her) entry. It was all a little shocking after what seemed like a slow (for me) labor that was taking forever for progress. Turns out, Charlie just has a slightly dramatic side and had to make her own entrance, Charlotte style. They didn’t have the warming bed on, the instrument table in the room, nothing. Way to make life a little more interesting, Charlie-girl.

Born at 4:08 pm. 7 lbs. 14 oz. My first VBAC and not my favorite labor by any means, but meeting Charlotte was so worth it. We didn’t know she was a girl until she was born and Sterling was a bit downcast at the thought of another sister – until he held her. It didn’t take long for everyone to fall in love.

We struggled with a name for Charlotte for a day. Charlotte or Chloe, and what for a middle name? The nurses suggested “Serenity” for her because of her disposition and that was thrown into the mix and we finally came up with Charlotte Serenity. Had she been a boy, we’d decided on Quincy Pierce.