We’re wrapping up school for the year! We survived! The last math lesson and English lesson were finished today, and all that remains are the final spelling tests for Sterling and Ruby. To celebrate, I ordered next year’s school books. I know, the irony. Just when I think I might have my sanity back for a few months I confirm that I’ll lose it again. Ugh. The two older girls are taking most of their classes at co-op next year, and they got their schedules today. Two middle schoolers now! Pierce joins the crew of school age kids, starting Kindergarten in the fall. That makes for six students, six grades, and me. I think I can, I think I can… 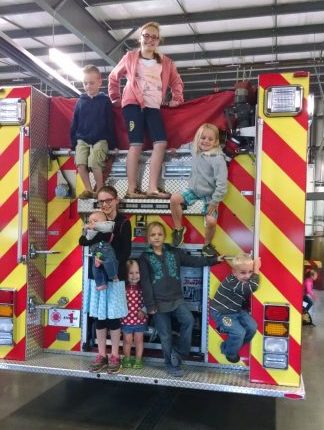 We went on a field trip Monday to the police station and the fire station. Tomorrow we’re headed to the zoo. Apparently we’re feeling like we have time on our hands. I cleaned out seven – yes, seven – 18ish gallon totes of fabric scraps today that had been sitting in the shed. I’m down to two totes. That was fun! I’m so over stuff. I had Sterling demo the old picnic table before garbage day tomorrow. He might have enjoyed that just a little bit too much.

Things I never imagined saying before today: “Elliot, stop whining. You have whined enough for today.” Even more unique to my mothering experience: she agreed. And stopped. Apparently she just failed to recognize we were at max whining capacity. I’ll be sure to let her know sooner next time!

The phone pole on our property is apparently going to be replaced. Today the big logging truck pulled up, used a giant claw to pick up a pole from the bed of the truck, dropped it on our property, and drove away.

Ten minutes later Pierce dished up himself cold mashed potatoes and leftover cold milk-based gravy and went and sat on the ground, put his bowl on the new phone pole, and ate what he apparently deemed to be lunch.