Many members of the Old Schoolhouse Review Crew have been reviewing Logic of English for the last month or so. Sterling (6 and in 1st grade) received and has been working on Foundations Level A. We received the softcover student workbook, hardcover teacher’s manual, Basic Phonogram Flashcards, Rhythm of Handwriting Cards in Cursive, Phonogram Game Cards, the Logic of English Student Whiteboard, and the Rhythm of Handwriting Quick Reference in Cursive.

I chose Cursive for Sterling since he’s not yet studied it at all. Foundations A was written for ages 4-7, and Sterling falls squarely into this category. Once we began, I realized Sterling had mastered certain aspects of this level, but not all. That part was a little bit frustrating. Sterling is a fluent reader of nearly every word he encounters, but hasn’t studied cursive. He loved figuring out if sounds were voiced or unvoiced, and while I can’t figure out how this will be helpful in the future, it did make a fun little game during our school day. Logic of English is written so that the student is never spending more than a few minutes with each little section – something Sterling really appreciated. He didn’t get bored. 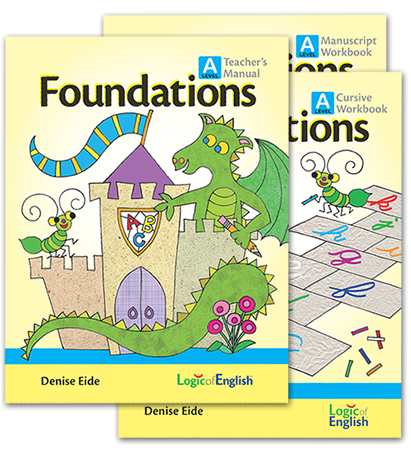 Logic of English teaches cursive by learning strokes that are repeatedly used in cursive writing. While both Sterling and I had to keep looking at the flash cards that were part of the Foundations package to see which stroke they were talking about, Sterling easily learned how to do them with a fair amount of ease. Within days of beginning he was writing his first letters and was so proud of himself. I’ve been quite happy with the speed it moved him along – early success is key for this perfectionist son of mine. While I think that Ruby (5 and in kindergarten) might have benefitted more fully with this program since she’s still a beginning reader, Sterling is enjoying learning to write in cursive. We had zero tears, zero frustration – rather unheard of for Sterling and his desire to do things perfectly the first time or give up completely. With small steps starting him off easy but moving him along quickly, Logic of English has been a great in teaching cursive. If I had started this with him earlier, before he was reading well, he could have benefitted far more from the other parts of the book – but he still enjoys those parts, so we’ll keep at all of them.

I especially like how it introduces sounding out words and putting them together – I’ll definitely be using this with my younger children as they approach learning to read and write. Learning to put the sounds they say together to form words has been a struggle for several of my children, and I think Logic of English would likely eliminate that problem all together.

To read more reviews on this and other Logic of English levels, visit the Review Crew Blog.